My obsession with books about restaurant life may finally be ebbing, but I’m going to throw in a couple more before I embark on a new fixation with computer games or sheep-shearing. Michael Ruhlman’s excellent chef series, which I mentioned a couple of posts back, comes at the cooking profession by starting with the person at the top. Lisa Abend’s The Sorcerer’s Apprentices on the other hand, starts at the bottom, following the stagiaires who flocked to Ferran Adria’s elBulli (which was to close last summer) to work like dogs in its hallowed kitchens, for long hours each day, for a grueling summer, all for free. 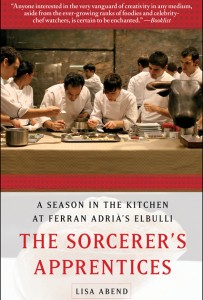 (I’m sure to many well-compensated professionals such an arrangement sounds outlandish, while publishing interns everywhere are shrugging bitterly and stealing an extra ream of letterhead. Not the Tin House interns, mind you, who are too preoccupied with their martini-testing duties to ever feel a moment’s rage.)

In elBulli’s kitchen the stagiaires spend hours preparing and plating rose petals to look and taste like artichokes, removing the brains and tongues from rabbit heads, and paring bits of rhubarb look like bits of sea cucumber. The details are as weirdly gripping in the rendering as they must be tedious to perform. And that is part of what intrigues me about restaurants like elBulli or Chicago’s Alinea—the most fantastical, whimsical, even humorous fare comes out of places that are more lab than studio, from people more technician than artist. They have to be, of course—anyone can produce a nice dish once or twice or experience a flight of creativity, but to do it professionally is about doing it the exact same way, the perfect way, over and over and over again.

Though I lobbied tirelessly for a Tin House team-building retreat at elBulli, I have never eaten there. I did, however, save up the cash to eat at Alinea once. It was my first meal in many years in which the primary topic of conversation during the entire four-hour experience was the food itself. What it looked like, what it actually was, the means by which we consumed it–dishes made of nesting porcelain orbs, pipettes that made squeaky sounds when we tipped the contents into our mouths, nuggets of shellfish bobbing atop spears of vanilla bean.

It was in many ways—and I say this with appreciation—a thoroughly ridiculous meal. That was half the joy of it: there is no life-and-death reason to create a powder of this or a gel of that, other than to see if you can do it well enough to render its eating a pleasure. That’s it. 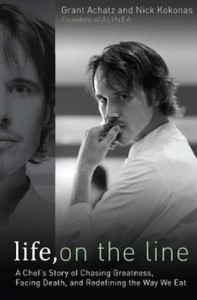 I had to admire Alinea’s devotion to play, to sussing out novel routes to pleasure and intellectual stimulation. But when I read Grant Achatz’s and Nick Kokonas’s Life, on the Line, which details how Alinea came to be and managed to continue despite Achatz’s life-threatening bout with tongue cancer, I remember thinking that if Achatz has a sense of humor, it resides in a potato-starch pipette hidden somewhere beneath the building. So maybe what this cooking is really about is the codification of play. And that does take some of the fun out of it.

I guess this is part of what puts people off of this stuff, in addition to the astronomical expense: the grave seriousness of its silliness. (That’s not to say that I believe devising a pillow that releases the scent of late-summer grass clippings to complement a tomato dish is any sillier than being devoted to inventing stories that never happened about people who do not exist.)

And then there is the fact that this type of cooking, which is based in science, as all cooking is, but which wears its science on its sleeve, can turn the pure animal satisfaction of the appetite into a more frustratingly cerebral experience. I mean, I love literature and believe it matters to the world in more ways than I can express, but discussions of literary theory have always left me wanting to pull each individual hair from my head just to mirror the joylessness of my life during such a conversation. There are times you just want a great story and a roast chicken, but then there are times you want that chicken to be served—ideally by a series of eunuchs of graduated size—as a selection of minuscule gems of its skin, its juicy thigh, the breast carved into a heart, and the hidden little oyster. Admit it. It sounds fun.