In his book The Table Comes First, Adam Gopnik categorizes James Bond creator Ian Fleming as the type of writer who is “so greedy that he goes on at length about the things his characters are eating, or are about to eat—serving it in front of us and then snatching it from our mouths. Ian Fleming’s Bond novels, for instance, feel as if the writer himself is excitedly eating with the character.” 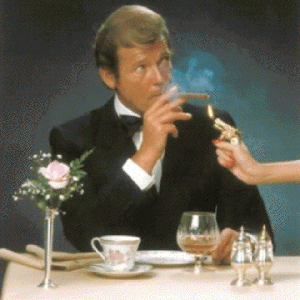 This statement was the first thing that has ever made me want to read a Bond novel or potentially see a Bond film. There’s always been something so unpleasantly leathery and paternal about the various Bondsmen over the ages, with their turtlenecks and their deeply tanned incipient jowls. The character always seemed too revealing a peek into the private den of someone’s father. But I was feeling a little combative over Gopnik’s “greedy writer,” so I skimmed my way through From Russia With Love, a bit of Dr. No, and Goldfinger. (Also, Tin House readers, I sometimes fear you are all so busy reading the latest blistering and high-minded arguments about the role of criticism in literature that you’ve not had time to explore pulp novels about spies and gin. You’re probably better people for it.)

Anyway, the long and short of it is that Gopnik is right. Here’s Bond on breakfast in From Russia with Love:

Breakfast was Bond’s favorite meal of the day. When he was stationed in London it was always the same. It consisted of very strong coffee, from De Bry in New Oxford Street, brewed in an American Chemex, of which he drank two large cups, black and without sugar. The single egg, in a dark blue egg cup with a gold ring round the top, was boiled for three and a third minutes.

It was a very fresh, speckled brown egg from French Marans hens owned by some friend of May in the country. (Bond disliked white eggs and, faddish as he was in many small things, it amused him to maintain that there was such a thing as a perfect boiled egg.) Then there were two thick slices of wholewheat toast, a large pat of deep yellow Jersey butter and three squat glass jars containing Tiptree ‘Little Scarlet’ strawberry jam; Cooper’s Vintage Oxford marmalade and Norwegian Heather Honey from Fortnum’s. The coffee pot and the silver on the tray were Queen Anne, and the china was Minton, of the same dark blue and gold and white as the egg-cup.

Suddenly I understood what Gopnik meant by greedy writers, and why Gopnik’s word “excitedly” is right on. Bond’s fetish, from the china to the egg cookery, is noted in absurdly loving detail, though Fleming likes to pull back a bit as well—Bond may be rigid in his tastes but the fact that he’s amused by taking a culinary stance on the mythical perfect egg suggests that he’s not really this silly. He gets to have it both ways.

Similarly, in Goldfinger, Bond allows himself to be wined and dined by a mysterious man named Du Pont. At a restaurant decorated with pink and white flourishes and staffed by “a pansified Italian,” Du Pont orders an appropriately feminine-hued meal of rose champagne and stone crab, which Bond devours: 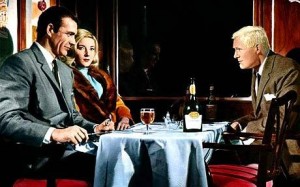 The meat of the stone crabs was the tenderest, sweetest shellfish he had ever tasted. It was perfectly set off by the dry toast and slightly burned taste of the melted butter. The champagne seemed to have the faintest scent of strawberries. It was ice cold. After each helping of crab, the champagne cleaned the palate for the next. They ate steadily and with absorption and hardly exchanged a word until the dish was cleared.

As one might expect of such a man and such a meal, Bond’s inner tough guy soon rebels, but only after he has thoroughly enjoyed himself:

Bond thought, I asked for the easy life, the rich life. How do I like it? How do I like eating like a pig and hearing remarks like that? Suddenly the idea of ever having another meal like this, or indeed any other meal with Mr. Du Pont, revolted him.

In this moment, of course, Bond is like that man who decides immediately after sex that he is terribly afraid of intimacy. He’s drowned himself in the rosy, fatty, strawberry-scented luxuries of the world, enjoyed it tremendously and therefore allowed the reader to experience it with him, but then retains his spy cred by resisting.

What this reminds me of most, Ian Fleming would probably not be pleased to know, is a scene from Little Women. Meg has been swept up in the whirl of a rich friend, whose maid dolls her up in a lovingly detailed gown, and a dangling earrings tied on with a bit of pink silk, and for once Meg is swathed in all the fine lace and silk the world can offer. But then she decides it isn’t for her at all—I believe she sees the March girls’ friend Laurie at the ball, looking at her new self with disdain—and turns her back on it. Like Bond’s readers, I am always just happy to get the details of the rich life before the moral victory for naked earlobes and good plain muslin frocks everywhere.

Bond gets to have it both ways when it comes to women, too. Here is the other Bond moment that I could not quite shake. In Dr. No, Quarrel is Bond’s local man in Jamaica, and Annabel Chung, the girl from whom Bond and Quarrel are trying to extract information, is a spy for the evil Dr. No. Just before the moment below, Bond has let go of Chung’s arm, disgusted with himself for causing her pain but not getting his information. It’s quite big of him. He relaxes and observes, however, while Quarrel indulges a little more light torture.

[Quarrel] took the Mount of Venus, the soft lozenge of flesh in the palm below her thumb, between his thumb and forefinger. He began to squeeze it.  Bond could see his knuckles go white with the pressure. The girl gave a yelp. She hammered at Quarrel’s hand and then at his face. Quarrel grinned and squeezed harder.[….]

“…Dat a fine piece of a woman, de Love Moun’. When him fat like wit’ dat girl you kin tell her’ll be good in bed. You know dat, cap’n?”

“Sho ting. Dat piece of da han’ most hindicative. Don’ you worry ‘bout she,’ he added, noticing the dubious expression on Bond’s face. ‘Hers got nuttin but a big bruise on she’s Love Moun’. But boy, was dat a fat Love Moun’! I come back after dat gal sometime, see if ma teory is da troof.”

I found this passage of Bond and his hopeful hench-rapist chilling. The creepiest part about it is that same sham that shows up with the stone crab scene—both girl and food offered for the reader’s delectation before we’re assured that no, Bond won’t indulge in buttered crab as a habit, and that he’d kind of like it if Quarrel didn’t test his Love Mount theory. (He tells him to get married and settle down.)

It’s not breaking news that the Bond novels are sexist. That’s a pillar of their appeal, and when one encounters a naked girl on a beach named “Honeychile Rider,” it seems a fair bet that Fleming is on at least one joke. What makes these passages interesting to me is the way these books ease right up to the line of sumptuousness or violence (as it was perceived in the Fifties anyway; it’s well over the line for most contemporary readers), dive in and wallow in it for a while, and then hasten back to the safer territory, where we can pretend we remained all along.

Michelle Wildgen is an executive editor at Tin House magazine. She is the author of the novels You’re Not You and But Not for Long and editor of an anthology, Food & Booze: A Tin House Literary Feast. Her fiction and nonfiction have appeared in publications and anthologies including the New York Times, O, the Oprah Magazine, Best New American Voices 2004, Best Food Writing 2004 and 2009, and elsewhere.