Today for lunch I had some chickpea stew with collard greens and Middle Eastern-style meatballs, plus a slice of some unsuccessful but still quite edible lemon yogurt cake, and an orange. I ate this at my desk, flipping through various web sites as I did. It won’t surprise anyone to hear that no one photographed me as I ate, but what I was doing was worthy of being immortalized.

Say I’d been photographed today by Peter Menzel and Faith D’Aluisio, authors of books Hungry Planet: What the World Eats and What I Eat: Around the World in 80 Diets ), or by photographer Miho Aikawa for the series Dinner in NY. Hungry Planet displays households surrounded by a week’s worth of food, while What I Eat gathers up one person’s diet for one day and arranges the portraits in order of calorie consumption, from the most austere to the most boggling. And Dinner in NY is precisely what it sounds like, from solo diners to parents and infants to extended families, sitting on beds and couches and at desks and minuscule tables and large ones, in living rooms and dining rooms and bedrooms.

There is some very deep draw to all of these images, not only for the voyeuristic pleasures of seeing behind closed doors and getting the intimate glimpses of how people satisfy their appetites, but because the subjects feel so unguarded. I don’t mean that they don’t know they are being photographed, for they all do, but that many of the images, in which families pose proudly before their great piles of meats and chips and sodas or baskets of lentils and produce, feel as if they’re pleased to display their lives. And some—I am thinking of one young Asian man, a gamer in China I believe, who staked out a place in an internet café for days at a time and had the same few dishes delivered around the clock—seem less pleased to share and more blasé, as if to shrug, Well, you asked. 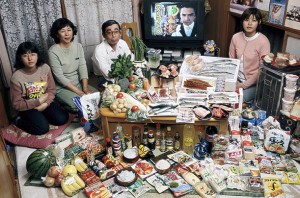 Would my lunch today, a thoroughly typical one, come across as lonely and workaholic? That’s a point that seems to be embedded in some photos of subjects looking at their iPhones or at their computers or TVs as they eat. Or would it seem decadent and American—that brimming bowl of soup, the yellow slice of cake with its indigo layer of blueberries and unworried use of eggs, the orange flown in from God knows where—compared to the images of families eating meals of great austerity, like porridge and a cup of tea?  Probably both, depending on the viewer and how I was presented.

I don’t know how much would have come through in the photo of me and my lunch, an imaginary photo that might seem to lack community and restfulness, but the websites I glanced through are ones I save for lunchtimes and brief breaks, ones that provide beautiful food imagery and discussion, or culture writing or, say, those advice columns like Slate’s “Dear Prudence” that are the most riveting voyeurism I know and should probably be required for all fiction writers. The soup was left over from the night before, so all I did was heat it up, but it had become more fragrant and savory overnight. And the cake is part of a baking extravaganza I embarked on a year ago when I was pregnant and felt I deserved a regular rotation of weekday cakes, and continues now that I have a baby to care for, when I clearly deserve it even more. My lunch was everything it appeared to be and more, I guess: it was solitary and technologically augmented, it was simple and easy to consume and it was also luxurious and privileged, to have that abundance at my disposal and a brief break in which to enjoy it. It was just a meal.