Earlier this week, I came across this small series of literary food pictures. The photographer, Dinah Fried, recreated meals and moments from The Catcher in the Rye, Oliver Twist, The Girl with the Dragon Tattoo, Alice’s Adventures in Wonderland, and Moby Dick. Fried certainly doesn’t skew toward literature’s most over-the-top meals. Some—like Oliver Twist’s gruel and mug of milk—are meager, and Alice’s tea party doesn’t even have food, just sugar cubes.  I love the precise tiling of the eggs on the Scandinavian smorrebrod far more than I liked the book, in which I have no memory of anyone eating anything. And something about the sheer childishness of Holden Caulfield’s grilled cheese, cut on the bias, is even more affecting than my memory of that difficult boy himself.

That Alice in Wonderland photo is what I keep returning to. I’m not sure if children’s literature provides more food memories than adult books do, but it does seem to give food a more elemental feel. Children’s book food has social and economic context, but somehow seems less preening than it can in work for adults.  There’s rarely a lot of description where the simple word “cake” will do, and its purpose for the characters is more essential too. In Frances Hodgson Burnett’s novels, basic food sates desperate, starvation-level hunger or makes ill, wan children round and healthy, and in Russell Hoban’s charming Bread and Jam for Frances , it is one of the daily ways a parent persuades a child to open up her routines. (Her mom packed wee lunches of a dozen little selections! She wrapped up twists of salt and pepper in waxed paper to go with Frances’s hard-boiled egg! Even a badger had better lunches than I did. Perhaps it’s unsurprising that this book doesn’t number among my mother’s favorites.)

Then there are the Little House on the Prairie books, which are basically a chronicle of the daily grind of planning how not to starve, but they never read as an unending task so much as the texture of life. The books’ food-focus is not news, but my perception of it has changed. As a child I found the Ingalls’ cooking a pleasant diversion: Ma colors the butter with carrot! Maple candy hardened on plates of snow! I developed an obsession with the vanity cakes fried in hot fat in On the Banks of Plum Creek, and when my mother refused to use her limited free time to devise and perfect a recipe based on the book’s brief description, I decided she lacked fortitude.

Whenever I write about myself as a child, I wonder why my mother even talks to me.

My own attempts at Little House-like endeavors have been sparse and unsuccessful. I once decided to make butter with a couple of gallons of organic whole milk, forgetting that modern whole milk lacks the fat of nineteenth-century whole milk. I took over a friend’s kitchen, flung droplets all over her walls by whipping around a large quantity of milk to no other demonstrable effect, then finally admitted defeat and gave the big bowl of frothed milk to the person with the best metabolism. 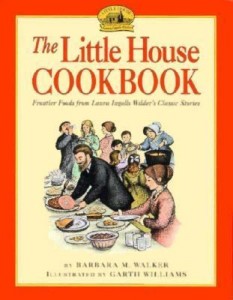 It was only when I read the books again just a couple of years ago that I no longer identified so strongly with Laura as a girl, but with her parents. (Okay, not Ma’s virulent racism, so much—and Ma is a killjoy in many ways besides, but I imagine we’d all lose patience with Pa always feeling some inchoate need to haul his family along on a new, doomed adventure.) It suddenly occurred to me that I was probably ten years older, give or take, than Ma and Pa. I felt an odd shifting of responsibility, like the realization that I was supposed to have been doing something for many years and did not, instead just horsed around with Laura in the yard, batting at a pig’s bladder when I should have been thinking about making the damn headcheese so we could live through January.

Anyway, food becomes a constant occupation and challenge—the tending of food, the preservation of food, the stretching of food when there was no guarantee more would be forthcoming from the woods or the plains or the stores that might not extend credit. It’s perilous.

Can you get that feeling of peril from a composed, serene shot of milk and porridge, a dish of sugar cubes? Lewis Carroll’s Alice in Wonderland books, after all, are harrowing, in a way that’s hard to get across with a little milky tea and some flowered china—not only can she not trust anyone or anything, but no one much notices or gives a shit about her. I never liked those books when I was little; they made me nervous. I kept thinking that any book with all that tea and all those cakes and bunnies would be light and comforting, but I was wrong every time.

Michelle Wildgen is an executive editor at Tin House magazine. She is the author of the novels You’re Not You and But Not for Long and editor of an anthology, Food & Booze: A Tin House Literary Feast. Her fiction and nonfiction have appeared in publications and anthologies including the New York Times, O, the Oprah Magazine, Best New American Voices 2004, Best Food Writing 2004 and 2009, and elsewhere.