In Jeff Jackson’s immersive new novel, Destroy All Monsters, musicians and audiences are terrorized by an epidemic of murder at music clubs. Here the intense emotional connection we find through music when we’re young meets our very real national nightmare of mass shootings. In his excellent debut novel, Mira Corpora, Jackson gave his readers a dreamy punk-rock dystopia through the eyes of an unforgettable narrator. In this new work, he goes deeper and even darker, looking at the way violence can spread like a virus through a community, and asking what meaning music can possibly hold in an era when everything is performance.

Jackson and I recently talked about Destroy All Monsters, music, and the problem of an increasingly surreal reality.

Cari Luna: Destroy All Monsters explores the place of music in our lives, the meaning we assign to it and the identity we draw from it. What role does music—both listening to it, and making it—play in your life, and how does it influence your fiction?

Jeff Jackson: I’ve always been obsessed with music and was lucky to grow up within range of WFMU, the legendary free form radio station that played everything from hardcore punk to Yiddish crooners to Japanese free jazz. That alone was an ear-widening education. A shared love of music has been the foundation of numerous friendships and sometimes served as a sort of emotional shorthand. There are concerts I count among the greatest experiences of my life. For a while, I worked as a freelance critic to support my music habit and co-founded a successful jazz blog that got written up in The New York Times and Wired. Music remains a constant in my life and I’m still eagerly seeking out new bands and sounds, though I have slowed down a bit.

When I’m writing fiction, sometimes I think in terms of music. I wanted my first novel, Mira Corpora, to have the rush of a great rock song – say, something by Sleater-Kinney. I like art that happens faster than you can process it, that delivers a visceral and emotional kick that’s hard to capture with words. For Destroy All Monsters, I imagined the opening of Side B (Kill City) as a sort of speed metal overture, something with a relentless rhythm and enveloping noise.

I also think about the musicality of my writing—the sound of the sentences, the tempo created moving between sections, the overall rhythm of the plot. And music has served as subject material for both my novels. In some ways, DAM was my naïve attempt to put my thoughts about music into one book so I could move past it.

As far as making music, that’s something I unexpectedly fell into after I finished DAM. I suspect it will be like my playwriting, a parallel creative stream whose influence on my fiction percolates at the subconscious level. The fact that I can write words which my bandmates and I transform into actual songs feels surreal—like a form of sorcery. 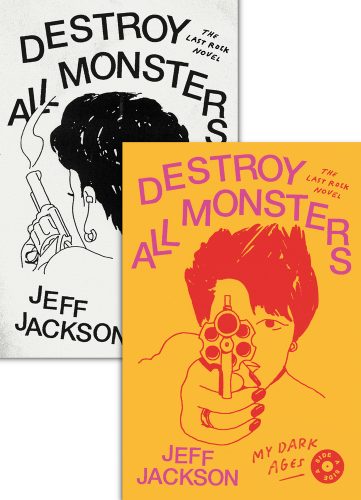 CL: I’ve wondered how your playwriting and fiction writing interact. You say that the playwriting influences the fiction on a subconscious level, and I imagine that your fiction likewise influences your playwriting. Do you find there’s significant overlap in themes and obsessions between your novels and plays? Do they come at the same universe from different angles? Or is it more a matter of different tools to solve different problems?

JJ: There’s definitely thematic overlap with the plays: The Last Party was inspired by Don DeLillo’s rock and roll novel Great Jones Street, Dream of the Red Chamber explored dream states and was performed for a sleeping audience, and Vine of the Dead focused on the power of ritual and possibility of contacting the dead. But those pieces feel like they take place in difference universes than my fiction. Their spaces could only exist in the theater—they’re partly created through video installations and intense lighting, sound, and set design, as well as the presence of the actors.

The plays have also explored subjects that are important to me which haven’t been part of my fiction: Buster Keaton’s films, Henry Darger’s paintings, Laure’s writings, Terry Fox’s sculptural installations, research into plant sentience. The plays often involve shared obsessions with my collaborators, what we find ourselves drawn to as a group.

Although I’m using different tools for fiction, my theater experiences have shown me how many different ways there are to dramatize a scene and structure a story. That’s something I’ve tried to carry over into the novels.

CL: In Destroy All Monsters, the reader is confronted with a nationwide epidemic of murders: musicians are being killed onstage. One character notes that the victims are all mediocre musicians, and that perhaps the murderous fans are acting in defense of music itself. I found this to be, among other things, a compelling reflection on the artist-audience relationship: the complicity and connection inherent in art, and in particular in music, which is such an immediate form. There are also, of course, unsettling echoes of our own current epidemic of mass shootings. Can you talk about what questions or preoccupations led you to link murder and live music?

JJ: One of my preoccupations was how music has lost the ability to move the cultural needle the way it did in previous decades. Even albums by huge mainstream artists get quickly swallowed in the endless noise of the internet – and it’s much worse for less popular acts. There’s still great music being made, but it doesn’t mean what it used to.

I recently saw Will Oldham (a.k.a. Bonnie “Prince” Billy) talk and he said that he’s writing new songs but has no plans to record them. He feels streaming has transformed people’s habits so radically that they don’t listen with the same attention and he worries the contract between artist and listener may be broken.

But I think music fans also yearn for music to mean something more. Our digital culture has flattened everything so there’s no cultural spark that helps to ignite the powerful sense of community and identity that can form around certain musicians.

That’s one of the frustrations that powers some of the characters in DAM. How can music become meaningful again? There’s the punk idea of wiping the cultural slate clean, but that doesn’t seem possible again. Then there’s the extreme Khmer Rouge idea of achieving Year Zero through a violent culling. That’s obviously a horrifying proposition, but some characters in the novel feel it might be why the epidemic of violence is erupting in music clubs.

In terms of the current epidemic of mass shootings, my notes for DAM go back over a decade. When images of killings in rock clubs initially flashed through my mind, the idea seemed positively surreal. The U.S. has been a violent country for a long time and the book is engaging that, but the speed with which reality has caught up to certain heightened aspects of my story has been alarming.

CL: This book as a physical object is compelling, with a novel on one side, and then you flip the book over and there’s a companion novella on the other side. How did the ingenious A-side/B-side format come about? And which came first in the process of writing the book—the A side or the B side?

JJ: The A Side definitely came first. Originally, I thought that was the entire novel. During the extended period when I was looking for an agent and publisher for it, I began to wonder if there might be more to explore. I kept picturing the book as the A Side of a vinyl single—which led me to start imagining a possible flipside. It felt important that the B Side offered something new and didn’t just retell the main story from a different perspective.

Honestly, it was a bit of a crazy undertaking. Several friends warned me that I was taking a project that was already unusual and making it twice as hard to sell. But I couldn’t shake the idea.

As I was writing Side B (Kill City), I thought it might be a companion novella that could be published separately. It took some time to realize both sides belonged together—that they comprised the total book. As it happened, FSG bought Side A without reading the flip side. I was very lucky they later agreed to publish them both under a single title.

CL: I love the moment where two of your main characters, Xenie and Shaun, are talking about B-sides, and Shaun says, “I’m always trying to write A-sides, but when I’m listening, I prefer the B-sides. They’re the tunes where the bands bury their secrets.”

Would that be a fair reflection of your own A- and B-sides in this book and the way they function together?

JJ: I’m glad that moment stuck out for you. While I generally agree with Xenie and Shaun about the musical nature of A-sides and B-sides, my take on the two sides of the novel is more complicated. For instance, I buried more secrets in the A-side My Dark Ages. And I don’t prefer one side to the other.

For me, the two sides feel integral to each other because they activate repetitions and echoes that might have remained dormant. Taken together, they simultaneously underline, erase, and rewrite each other—while still adding up to a new whole. Maybe it’s something like an immersive drone, suggesting a larger narrative that you can’t quite picture but whose shivering shape you can feel in the base of your spine.

Jeff Jackson is a novelist, playwright, visual artist, and songwriter. His second novel Destroy All Monsters was published by Farrar, Straus & Giroux in Fall 2018. It received advanced praise from Don DeLillo, Janet Fitch, Dana Spiotta, Ben Marcus, and Dennis Cooper. His novella Novi Sad was published as a limited edition art book and selected for “Best of 2016” lists in Vice, Lit Reactor, and Entropy. His first novel Mira Corpora, published in 2013, was a Finalist for the Los Angeles Times Book Prize and featured on numerous “Best of the Year” lists, including Slate, Salon, The New Statesman, and Flavorwire. His short fiction has appeared in Guernica, Vice, New York Tyrant, and The Collagist and been performed in New York and Los Angeles by New River Dramatists.

Cari Luna is the author of The Revolution of Every Day, which won the Oregon Book Award for Fiction. A fellow of Yaddo and Ragdale, her writing has appeared in Guernica, Salon, Jacobin, Electric Literature, Catapult, The Rumpus, PANK, and elsewhere. She lives in Portland, Oregon.

Dear Reader: A Q&A with Christopher Soto
Tin House and the Ace Hotel

You Can Feel It Like a Demon, Swallowing You Slow: An Interview with Marlon James