Rob Spillman: “Bullet Number Two” (Portland/Brooklyn issue) is an excerpt from your new novel. Are you done? If so, when is it coming out?

Hannah Tinti: I’m finishing the novel now, which still doesn’t have an official title yet. I’m re-working the last 100 pages and it has been tough. Neil Gaiman said, “Novels are never completed. Just abandoned and published.” And that’s how I’m feeling right now. Getting ready to abandon ship.

RS: What was the inspiration behind the bullets?

HT: This book is about a man who gets shot again and again and again and keeps on living. The bullet chapters, which are all told from Hawley’s point of view, are stand-alone pieces that chronicle turning points in his life. Over the years Hawley is shot twelve times—a loose re-imagining of the twelve labors of Hercules. Eventually his scarred body becomes a map of his life, as well as the novel. The chapters inbetween the bullets are about Hawley’s daughter Loo, and how she comes to know her father and herself, while solving the mystery of her mother’s death.

RS: What brought you to Brooklyn?

HT: I got evicted by my landlord and kicked out of the lovely, roach-filled, illegal sublet I’d been living in for ten years on the Lower East Side. At that point, nearly all of my friends were already living in Brooklyn. I’ll admit at first I was prejudiced—I thought it would be like moving to the suburbs. But then I found an apartment two blocks from my best friend, surrounded by bars and restaurants and bookstores, with a little backyard, and neighbors who said hello, and a sink in my bathroom, and hot and cold running water, and I thought, why the hell did I hold out for so long? 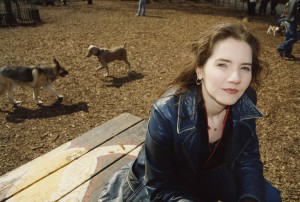 RS: You have lived and worked in Brooklyn for a long time now. What are the greatest changes you’ve seen?

HT: Definitely the baby trees. There used to just be a few of them in Prospect Park, and anyone who wanted could go there and pluck a baby and take it home. But now the baby trees are growing wild, out of subway grates and cracks in the sidewalks, and those baby trees drop babies everywhere. You can’t walk five feet without accidentally stepping on one. Also: the recent infestation of mustaches (handlebarus waximus). I heard the city is going to spray for them, like they did for gypsy moths.

RS: You are the editor of the very successful One Story magazine and also an accomplished fiction writer. How do you divide the time between your editorial and creative self?

HT: Editing and writing are very different modes of thinking—one mathematical, the other creative. I try to focus on One Story during the week, and on the weekends, I shut down and move into the more dream-like, contemplative state I need to be in for the words to come out. If I’m under deadline or trying to finish a project, as I am now, I tend to work late at night, when everyone else is asleep. There’s a well of imagination that opens up when the emails and phone calls stop coming. The only trick is trying to stay awake.

RS: Do you ever get the feeling that Brooklyn has gotten too hip, has too many writers per square inch, and want to flee?

HT: It’s not the writers who make me want to flee. It’s the lizard people who follow the writers. The same thing happened on the Lower East Side. It was a cheap place to live and so writers lived there, and then an industry grew up around those writers—liquor stores and coffee shops and street carts selling pounds of fresh, clean, white paper. Then the New York Times ran a piece in their Style Section about the street carts selling paper and the next day lizard people started moving in, and the landlords evicted all the writers and built condos and tripled the rent. It’s a cycle. Luckily, Brooklyn is pretty big, so it will take a while before the whole place is covered with lizards. Not sure where I’ll go then. Maybe Portland.

RS: What are your favorite things about Brooklyn?

RS: What are your least favorite things about Brooklyn?

HT: There aren’t any 24 hour delis in my neighborhood. I used to be able to buy mangoes at 3 AM. It was exotic and wonderful to purchase and eat fruit in the middle of the night. I miss it.

RS: Any favorite books or stories set in Brooklyn.

HT: A Tree Grows in Brooklyn by Betty Smith. I read it when I was ten, but I will never forget those star banks nailed to the closet floor, or Francie riding the trolley over Brooklyn Bridge, or her wonderful, drunken singing-waiter father, or her mother shooting that pedophile on the stairs.