Picture this. A young woman, not yet twenty-one, waits backstage during the dress rehearsal of La Muette de Portici, a ballet in which she’s earned the lead role. Gas lamps cast a quiet glow across the stage and into an empty theater. The year is 1862 at the Paris Opera, a place this ballerina was born into. Her mother was only sixteen and a dancer herself when she caught the eye of a baron. He lusted after the prowess she bared onstage, took it for himself, and abandoned her once she got pregnant. Where a mother’s career ended, her daughter’s began. Just beyond the curtain of La Muette, the young ballerina flounces her skirt in preparation to make her entrance. The gauze accidentally catches fire from the flame illuminating the stage. As the blaze spreads across her body, she staggers into the light. It takes too long for spectators to dampen the fire, and she suffers for months before dying from the burns she sustained. Her name was Emma.

Aside from her body on fire, we don’t know much about Emma Livry’s life. In that way, she’s no different from countless French dancers who worked for as little as 300 Francs a year and lost their contracts before their thirtieth birthdays. I don’t think they danced for a chance at fame, or even immortality. Like so many female artists I know, even an ingénue of the 19th century entertainment industry understood she worked on borrowed time, fed by feckless men. I think these young women danced for survival—of both soul and body—one performance at a time.

I grew up in the shadow of Pennsylvania’s empty steel mills, something of a Rust Belt ballerina myself. As a teenager, I danced at a barre made from old iron pipes, and I wasn’t very good. I didn’t need to be. I loved the practice of ballet more than the performance, the dirt and sweat and longing that came with making art out of the body. The choreography came to me like a breath, starting in my core, haloing my shoulders. A tendu, a plié. A crackle from the stereo, the scrape of a folding chair on the pocked floor of an empty building where I had my lessons. A wall of mirrors across from another wall of mirrors made me feel infinite—my body in replicate. I needed that then, an army of selves to protect me from my own secrets. I’d never told anyone that a piano teacher had sexually assaulted me when I was ten and he was 42, and I wouldn’t for another twelve years. He lived in a small house in a small town, but he was a giant to me. No one outside my hometown would recognize his name, and no one ever will. I’ve had my silence, and now he has his.

I never became a professional dancer. Instead, I wrote about the assault and its fallout a hundred different ways. I could write a hundred more. I am my pen’s choreographer; every blank page is a dance all its own. The young ballerinas of Livry’s time, many of them the same age I was when my secrets held me captive, performed every night at the pleasure of France’s privileged and influential men. They also knew a woman’s strength is often born from doing what’s necessary for her art. Even still, they taught their bodies to prophesy. Tell me men are the stronger sex, and I’ll tell you a thousand stories like Livry’s that will defy you. 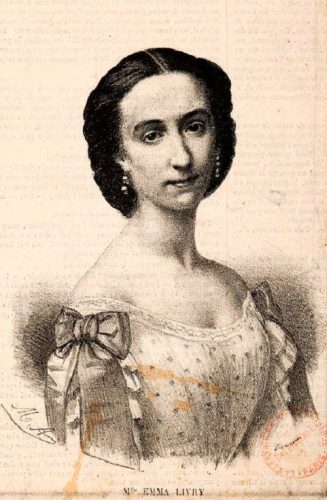 I found the facts of Livry’s life—and the lives of two other iconic ballerinas—captured in Three Dancers of the 19th Century by Cyril W. Beaumont. It’s an out-of-print biography published in 1935 that I tracked down in St. Bonaventure’s Fine Arts Library in upstate New York. Like me, Beaumont would never become a professional dancer. But he loved ballet so much that he abandoned his parents’ wishes for him to become a chemist, opened a bookstore, and self-published over thirty biographies dedicated to an art form he could only admire and could never recreate. It sounds noble enough, as the acts of men so often do.

Known for his perpetual bow tie, Beaumont had an obsession with ornamental beauty. As a biographer, he made no secret of equating a dancer’s personality to her looks. He, alongside other writers, wrote that dancer Pauline Duvernay overcame her stage fright the moment she decided to become “more than pretty,” as if her physical allure had hindered her work as an artist rather than the opinions of male opera critics who failed to see past it. She was weak, these men wrote—likely because she was slim. They knew nothing of her personal life, of the love affair she kept hidden until it ended and she attempted suicide by swallowing a concoction of copper coins and vinegar. It didn’t take long for gossip to spread. When Duvernay’s former lover informed her of his engagement to another woman, she said:

“You are about to marry and I am about to die.”

Duvernay survived, but her elevated reputation among the Opera’s elites and critics did not. A woman’s passion, after all, was only fit for the stage.

Beaumont underscores the reality of living-while-female without fully understanding it: we know what it is to pay the price for a man’s selfish whims. They often cost us our careers, our safety, even our lives, as our testimonies raise nothing but suspicion. I never told the truth about my piano teacher because few people believed the young women, my fellow victims, who did tell the truth. Even Beaumont considered himself the best judge of a dancer’s convictions, as if she couldn’t speak for herself.

In the 19th century, gas lights illuminated the stage during performances. This method provided the desired ambience, but also proved to be dangerous. The ballerinas’ lush costumes were made of highly flammable gauze and tulle. In 1860 when Livry was just eighteen, already a dancer had died from gas burns obtained onstage at Drury Lane Theater. Even so, Livry remained undaunted. On September 3, 1860, after continued pressure to wear skirts doused in a fireproof solution that rendered them heavy and gray, she wrote a letter to the director of the Opera:

“I insist, Sir, on dancing at all first performances of the ballet in my ordinary ballet skirt, and I take upon myself all responsibility for anything that may occur.”

She knew the risks. She danced anyway.

Livry was so popular at the time that a prescient ballet had been written for her about a butterfly drawn to a torch (Le Papillon). Even famed author Ernest Feydeau sought her expertise while writing his novel, Le Mari de la Danseuse, a book not about a ballerina, but a ballerina’s husband. He asked Livry about the possibility of death by fire, and Beaumont captured her response this way:

“She said, ‘To be burnt to death, that must be very painful.’

Then, a moment later:

At a dress rehearsal on November 15, 1862, not long after she’d met with Feydeau, Livry’s skirt ignited. By the time the fire was extinguished, burns marred her back, arms, and legs. An eye witness, primed with an eye for ballet, commented only on its optics: “It was a strange and affecting sight to see her walking amid fire.” Even Beaumont himself called her a “living torch.” Feydeau’s story itself later reflected Livry’s onstage tragedy so exactly that it led Beaumont to wonder if the author had changed the details of his novel’s climax to match Livry’s before it published in 1863. I have to believe Emma, who spent her life in the ballet, was accustomed to being devoured by men who loved the opera long before the flames took her. To them, a ballerina was mortal, but inhuman. A live art installation. Livry died seven months later from an infection resulting from the fire, just twenty years old, and was laid to rest as two white butterflies circled her coffin on its route from the church to the cemetery.

Beaumont called Livry’s death a “cruel” twist of fate; he said that she couldn’t have known she might be sending herself to her death because he couldn’t understand why she would endanger her own life for her art. He couldn’t see that so often, a woman’s art is her life. It’s safer, perhaps, to think of a young woman like Livry as a naïve martyr instead of a wide-eyed warrior. A sidekick in a man’s salvation story. Livry’s own words paint a fiercer picture, whether Beaumont recognized it or not.

After a quicksilver career that shot her to fame across continents, now Livry is known only as the “ballet girl” who burned to death. It’s a tragedy, but not because she was fated to die, as Beaumont believed. This “fate” was inevitable when ballerinas were treated as pieces of equipment, they and their skirts somehow easier to “fix” than the lights themselves. Offering her life for her art was one of the few choices that was Livry’s to make. This is where Beaumont’s skills as a biographer, and more urgently as a man, fall short. He took ballet—the female form, the female experience—as his for consumption. He never felt its risk. His portraits will never be complete, and his testimony cannot stand against Livry’s own.

More than a century after her death, her burning body still speaks out, as do the burning bodies of so many women, including mine. Our silence and our stories offer the same wisdom and warning—a man, like a moth to a flame, will not heed your words if he aims to feast on your body.

Amy Jo Burns is the author of Cinderland, and her writing has appeared in Salon, Good Housekeeping, Electric Literature, Ploughshares Online, The Rumpus, and Jezebel.  Her novel Shiner is forthcoming from Riverhead Books.