From the sublime (listening to Chimamanda Adichie talk about her creative origins) to the ridiculous (dodging crowd-surfers at a Skrillex concert amidst 20,000 barely clad teens on a Jersey beach), my springtime cultural diary.

April 20-22
Los Angeles Times Festival of Books
The weekend kicked off with the Los Angeles Times Book Awards, hosted by the all-around smart critic David Ulin. While the ceremony itself lasts too long (especially after flying in that day from New York), you have to appreciate the scope of the awards and the variety of nominees (hardly any overlap with the National Book Critics Circle or National Book Awards). Happiest surprise winner was in First Fiction for Portland-via-Bosnia’s Ismet Prcic for his novel Shards.

Since moving from UCLA to USC last year, there have been cutbacks, most notably the chocolate fountain at the awards ceremony after party, but amazingly the festival has still thrived, attracting a hundred thousand visitors.

Saturday and Sunday we were stuck in purgatory, in a booth facing away from the main drag. Luckily we were able to pass the time with our boothmates from N+1, and the occasional lost soul.

Sunday I was on an indie publishing panel with Ken Baumann (publisher of the very funky Sator Press) and Sumanth Prabhaker (who publishes beautiful one story chapbooks under the Madras Press label). After we solved all of the indie world problems, the usual LA crazies lined up to press manuscripts on us. My favorite was a woman with gigantic glasses and Roz Chaz cartoon frizzed out hair who screamed at me, twice,“I’ve written a memoir called Jewish Bitch!” Sold.

May 3
Portland Arts and Lectures.
The country’s most successful literary reading series with over 2,700 subscribers hosted Chimamanda Adichie. I’ve introduced or seen Adiche read in numerous cities, including New York, Nairobi, and Washington, and she is always gracious and inspiring. This night was no different as Adichie, after a day of visiting local schools, talked about her Nigerian home town and her influences, then kept on charming us through dinner back at the Tin House offices. 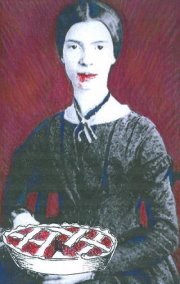 May 8
Poetry & Pie reading at Four & Twenty Blackbirds.
Readings are usually a lot more fun when you collaborate with friends, so we brought in A Public Space, BOMB, and Ugly Duckling Presse to help us put on an occasional poetry reading series in the face-melting pie shop below the Tin House offices in the Gowanus are of Brooklyn. Cate Marvin, Matthea Harvey, Matvei Yankelevich, and Karen Weiser delivered the goods.

May 9
Barney Rosset memorial at Cooper Union
As our publisher, Win McCormack, wrote in his remembrance, “Barney Rosset was a great man, and like all men of that stature he had both great virtues and equally great flaws, and his flaws were typically exaggerated or distorted expressions of his virtues.” The service was full of family, friends, and colleagues who remembered the tireless champion of freedom of expression and the man who brought Beckett, Robbe-Grillet, Duras, Oe, and Miller to the US.

May 14
Franklin Park Reading Series
Crown Heights? Monday night? Indie lit reading series? Good luck with that. Actually, they need no luck. Penina Roth puts on a totally kickass series and the funky bar was mobbed for readings by Elissa Schappell, Robert Lopez, Miles Klee, Jac Jemc, and Daniel Long. May 15 Cocktail party for Emma Straub to celebrate the impending publication of her novel Laura Lamont’s Live in Pictures, at the Silver Lining bar. Why wouldn’t you come out for one of the nicest, my generous people in publishing?

May 16th
Benefit for Yaddo at the Angel Orensanz Foundation.
The former synagogue (the oldest in New York City) was the setting for the annual fundraiser for the oldest writers colony in the US. The evening featured a tribute to the longtime Yaddo supporter Pat Towers, the venerable editor who has helped countless writers throughout her distinguished career. Good vibes all around as many a Tin House favorite was in the house, including Amy Hempel, Jim and Karen Shepard, and Jo Ann Beard.

May 18
Bamboozle Festival, Asbury Park, New Jersey
23,000 barely clad people on the beach for a music festival? Sure, why not? Did I mention I was taking my thirteen year-old? We were there to see Skrillex. Really. In the seven preceding hours, there were a lot of red-faced screamo bands, all equally bad. The DJ stage opposite the main stage actually had a few interesting acts, including David Garibaldi, who paints portraits to music why dancing around the stage. We were driven there by a truly tedious set by white misogynist rapper Mac Miller. In order to be close up for Skrillex we endured sixty minutes of the resurrected Incubus, the 90s band which is a cross between Sting and Stone Temple Pilots, equal parts bombast and pretention. Skrillex, on the other hand, was relentless goofy fun. Subtle he is not, but hard to argue with twenty thousand people jumping up and down for an hour and a half.

May 19
Lit Crawl Brooklyn
Having been Bamboozled, I was running on fumes, but luckily Science Issue contributors Michelle Legro and Rachel Riederer, with an assist from Tin House editor Emma Komlos-Hrobsky, pulled out a fun Science-based trivia challenge that packed the Braven Head Tavern. Despite it being the thirteenth and last stop on the Lit Crawl, people did remarkably well answering Michelle and Rachel’s fiendish questions. As everyone retired to Local 61 for the post-crawl party, I had just enough energy to glow with a little Brooklyn literary pride.

The Fiction of Peace

Two Truths and a Lie: What do Fiction Writers Take from Life?