Baby of the mistaken hue, child of the wrong nose
with its measure unleashed, baby of the nappy knot,
I am your mother. Mad at your whole damned face,
I swear to the task of torching the regrettable Delta
from your disobeying braids. I pinch your breathing
shut to reteach the bone, smear guaranteed cream
on your pimpled forehead, chin, and cheeks. I am
the corrector. Soaking a kitchen towel with the blaze
of holy water, I consider just what you are naked,
recoil at the insistent patches of midnight blanketing
your skin and I scrub, scrub, push the hard heel
of my hand deep into the dark, coax cleansing
threads of blood to the stinging surface, nod gently
in the direction of your Mama, don’t! I command
you to bend, to turn, to twist in the wobbly dinette
chair and reveal what hides from me, those places
on you that still insist on saying Negro out loud.
Remember how the nonbelievers screeched their
nonbelief at Jesus even as He laid His giving hands
upon them? One day you will comprehend the torch
I am. You will be burned smaller, lighter, ever closer
to the whiteness of my God, who loves you as you are. 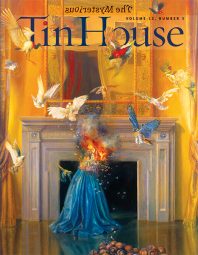 Patricia Smith is the author of six books of poetry, including Shoulda Been Jimi Savannah, winner of the 2014 Rebekah Bobbitt Prize from the Library of Congress, the 2013 Lenore Marshall Poetry Prize from the Academy American Poets and the Phillis Wheatley Award in Poetry; Blood Dazzler (a National Book Award finalist); and Teahouse of the Almighty (a National Poetry Series winner). She has won two Pushcart Prizes and has been awarded fellowships to Yaddo and the McDowell Colony, where she worked in a studio once occupied by James Baldwin. This poem originally appeared in Tin House #47: The Mysterious.