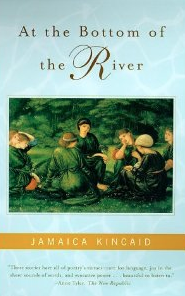 “I milked the cows, I churned the butter, I stored the cheese, I baked the bread, I brewed the tea, I washed the clothes, I dressed the children; the cat meowed, the dog barked, the horse neighed, the mouse squeaked, the fly buzzed, the goldfish living in a bowl stretched its jaws; the door banged shut, the stairs creaked, the fridge hummed, the curtains billowed up, the pot boiled, the gas hissed through the stove, the tree branches heavy with snow crashed against the roof; my heart beat loudly thud! thud!, tiny beads of water grew folds, I shed my skin…”— “The Letter from Home,” Jamaica Kincaid

When I first read Jamaica Kincaid, I was in college and taking classes in both fiction and poetry. At 82 pages, At the Bottom of the River is as slim as a book of poems. I used to carry it around in my purse. You can’t use it to flatten out a poster or clobber a mouse. In those few pages, my understanding of fiction transformed radically. This was a writer who took risks: shifting narrators, wildly metaphysical sentences like, “the blackness fills up a small room, a large field, an island, my own being,” entire stories made up of one single sentence.

These sentence stories unravel and expand like endless bridges. They have the ability to simultaneously suspend and propel the reader. We trust her semi-colons and follow until we are surprised to find the period. We stand on that rock of a period –with water all around us, and ask: how did we get here?

In an interview with Jonathan Galassi at Farrar, Straus, and Giroux, Kincaid speaks about sentences: “I so like to walk around with a sentence or two in my head. Of course with me, a sentence can be a couple hundred words. It would be easier if my sentences were five words: I see the cat jump. But I have no such luck.” Her one-sentence stories have this walking quality, as if we are circling a lake in multiple ways in order to see it better. The difficulty of Kincaid’s long sentences, tucked into seemingly simple language (“I milked the cows”), challenges and stretches me. They are akin to fractals – comforting in their repetitive structure, disarming in their very existence.

“Girl,” Kincaid’s most anthologized one-sentence story, reveals a mother-daughter relationship through directions of negation (“don’t sing benna in Sunday school”) and interrogations. The voice is rhetorically manipulative and repetitive, leaving the reader exasperated. I’ve taught this story time and again; each time I return to “Girl,” I am overwhelmed by its forceful voice, unfolding over three pages. Like the daughter, I am stifled through language and the ongoing rush of semi-colons – a kind of emotional scythe.

Yet, there is another one-sentence story in this collection worth attention – the seemingly quiet, unassuming “Letter from Home.” Hidden in the middle of the book, this sentence is certainly strange. Even the title, “The Letter From Home,” isn’t quite what we expect. Who is the recipient of this letter? Is “Home” writing? How can this story be a letter if it’s addressed to no one?

Kincaid’s sentence begins with a litany of actions, a kind of checklist of the day: “I milked the cows, I churned the butter, I stored the cheese…” In particular, the narrator owns these actions: “I” did this. Immediately, we enter this singular interiority, quite different from “Girl.” This survey of the mundane eases us in, creating a familiar rhythm, in four syllables or so. Right when we settle into our easiness, Kincaid hints at the extraordinary. After a fly buzzes, we have “the goldfish living in a bowl stretch[ing] its jaws…”

This zoom-focus is another reason why I love this sentence. When our perspective changes, everything appears extraordinary and unfamiliar. From the vast exterior of milking a cow, we zoom into a goldfish’s mouth (which I can only imagine is gold). And in just a few moments, this specificity zooms out again: “there was movement, it was quick, there was a being, it stood still, there was a space, it was full, then there was nothing…” We zoom so far out that we leave tangible space itself. And we are forced to grapple with this dizzying movement.

This constant zooming always felt metaphysical to me, which is another way in which Kincaid measures the mundane with the extraordinary. The self, the one who milks cows, becomes electrified with curiosity: “I felt my skin shiver, then dissolve…” Here, the self is formless, disintegrating away from the concrete, domestic world of stairs, curtains, and pots. And later: “I saw something move, I recognized the shadow to be my own hand…” I can’t help but think of John Donne’s “A Lecture upon the Shadow.” Yet, rather than Donne’s “brave clearness all things are reduced,” we have an (equally brave) expansive obscurity.

The sentence begins to sway as “the house sway[s],” with the use of parentheses – moving into the cavern depths of the sentence: “(Is the Heaven to be above? Is the Hell below? Does the Lamb still lie meek? Does the Lion roar? Will the streams all run clear? Will we kiss each other deeply later?)…” From questions of the divine to the tangibility of kissing, language sways as we consider how life began.

Depending on where we position ourselves, what we see can change and move. That which is quiet can become violent, and then quiet again. As much as there is beauty, there is also terror: “the cat licked his coat, tore the chair to shreds, slept in a drawer that didn’t close…” These three actions occur almost simultaneously. Plus, there’s something about that stubborn drawer that brings us closer to the scene –to the point in which we want to close that drawer. We want to wake the cat and push against the drawer with both hands.

At the end of the sentence, we reach a place of decision-making. From to-do list certainty to the vastness of the earth spinning on its axis, we are confronted with a man who appears suddenly and without reason: “He beckoned me, Come now; I turned and rowed away, as if I didn’t know what I was doing.” Her refusal to go is not surprising; what’s strange about this ending is her appearance of ignorance. She knows exactly what she’s doing, and yet she hides that knowledge. And here, at the end of the sentence, we want to know why. But we row away as she rows away, somewhere else.

After reading and re-reading Kincaid, I now see the sentence as a conduit – as an arm reaching out to the next sentence. This is exactly what “The Letter From Home” does, across stories. The last word of the sentence is “doing,” which picks up in the title of the next story, “What I Have Been Doing Lately.” As a poet who loves length, I hold Kincaid’s sentences dearly, as a measured refusal of breakage. Or, rather, a celebration of a labyrinth we can’t help but wander through.

Jane Wong is the recipient of fellowships and scholarships from the U.S. Fulbright Program, the Bread Loaf Writers’ Conference, and the Fine Arts Work Center. Her poems have appeared in journals and anthologies such as CutBank, Salt Hill, Hayden’s Ferry Review, Mid-American Review, The Volta, The Journal, Best New Poets 2012, and The Arcadia Project. Her most recent chapbook is Kudzu Does Not Stop. She holds a MFA from the University of Iowa and teaches literature at the University of Washington.

The Art of the Sentence: László Krasznahorkai, War & War