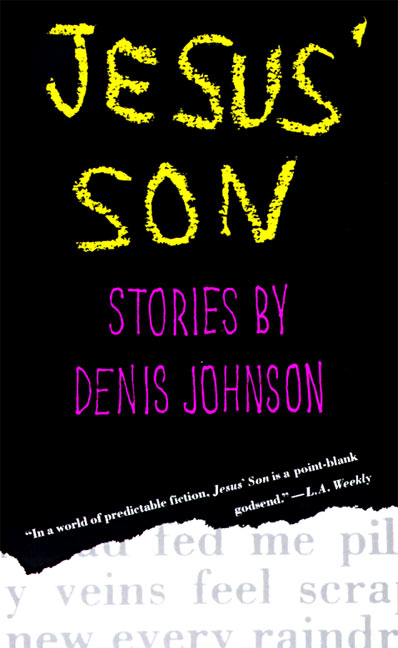 “Usually we felt guilty and frightened, because there was something wrong with us, and we didn’t know what it was; but today we had the feeling of men who had worked.” —Denis Johnson, “Work”

Jesus’ Son is the one indispensable story collection I own, the slender book I would slide into a coat pocket before banishment to Siberia. In graduate school, I read Jesus’ Son in one sitting on a too-small couch. The couch is one of two things I remember vividly about the apartment, the other being the too-tall bookshelf, which attracted the few grad students who visited, one of whom removed my copy of Ulysses and unjustly accused me of crossing out sentences I didn’t like. My favorite story in Jesus’ Son rotates between “Car Crash While Hitchhiking,” “Emergency,” and “Work.” The first two appeared in Best American Short Stories after debuts in The Paris Review and The New Yorker, respectively, and are better known than “Work,” which begins with the unnamed protagonist shooting heroin in a Holiday Inn with his girlfriend and ends with him drinking in a bar with his friend Wayne. In between, the protagonist and Wayne work, which consists of removing copper wire from the walls of an abandoned house. The house is–or was, allegedly–Wayne’s. The protagonist feels “guilty and frightened” with Wayne, but just what they feel guilty about and frightened of is unclear. Taking the copper wire doesn’t particularly bother them. Johnson follows the introductory independent clause with a dependent clause, which clarifies only that “something was wrong.” He then adds a second independent clause, noting they “didn’t know what it was.” There is something artful and sad in juxtaposing the certainty that something is wrong with the uncertainty over what that thing is. 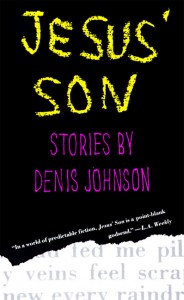 The protagonist has plenty to burden him. Upon leaving the Holiday Inn, he elbows his girlfriend in the stomach before college students, who take her away in their car. In violation of Chekhov’s axiom that a gun introduced in the first act should go off in the third, Johnson never returns to her, though the protagonist takes mournful interest in women throughout the story. It’s likely that whatever worries him has to do with women, whom he refers to variously as “beautiful,” “delicate,” “nurse,” and “mother.” There’s a lot going on here, but I hesitate to suggest much self-awareness on the protagonist’s part. The story–the entire collection–offers flashes of lucidity, yet for much of the book, the protagonist is too high or drunk (or both) to trust his own storytelling. The reader should not expect reliability, if that is something a reader should ever expect.

Which is to say the protagonist probably doesn’t know what’s wrong with him. Wayne is no more reliable, an impulsive presence who stops by his ex-wife’s house on a whim and challenges an enormous man to a fight over cards. Whatever history the protagonist and Wayne share doesn’t require exposition beyond Johnson’s line that “all the really good times happened when Wayne was around.” When the reader meets Wayne, his hands are shaking so badly he can’t lift a glass of bourbon to his lips. The protagonist lifts it for him. That is their relationship.

Johnson completes the sentence with a third independent clause, taking the grammatically redundant step of including both a semicolon and coordinating conjunction (“but”). I’ve thought a lot about why Johnson does this. He may have felt the need to differentiate this clause from the preceding three. A semicolon is more forceful than a comma. Take away the conjunction, however, and the sentence threatens to sound melodramatic:

Usually we felt guilty and frightened, because there was something wrong with us, and we didn’t know what it was; today we had the feeling of men who had worked.

The first alternative places even more weight on the last clause; if anything, it risks greater melodrama.

What is the “feeling of men who had worked”? The Romans distinguished work (negotium) from leisure (otium); work, effectively, meant the absence of leisure. This is something the protagonist and Wayne might appreciate. When they’re not working, they’re drinking at the Vine, a bar that possibly refers to the Fox Head in Iowa City. It’s clear that working is a departure from the occupation of drinking, and the protagonist complains at one point that hard manual labor is messing with his high. This is not to suggest that their drinking is leisurely. When the protagonist finds Wayne at the Vine, he is the only customer there. In lieu of a jukebox, a stereo plays “tunes of alcoholic self-pity and sentimental divorce.” Whatever pleasure one finds is complemented by pain. The “feeling of men who had worked” is a corrective to that pain. It allows pleasure to exist, in the moment, as pleasure alone.

That Johnson doesn’t clarify what the feeling is seems significant. I suspect he believes that however rare the feeling might be for the protagonist or Wayne or the reader, it is identifiable all the same. Who hasn’t experienced the natural high of a job well done? Forget, for a moment, what the job is. Focus, instead, on the feeling not of working but of having worked. Johnson shifts from the past tense to the past perfect here. The work is decidedly finished. The protagonist is narrating that tiny window where you get to feel good without doing anything. For some people, that window opens every day. For other people, it hardly opens at all, so it is memorable when it does.

Kevin Clouther was holds degrees from the University of Virginia and Iowa Writers’ Workshop, where he completed his thesis under Marilynne Robinson and won the Richard Yates Fiction Award for best short story. He has worked at The Iowa Review, Meridian and The Virginia Literary Review, where he served as Fiction Editor. He teaches creative writing at Stony Brook University, where he coordinates the Program in Writing Reading Series, and John Hopkins. He lives in Floral Park, New York with his wife and two children.

His collection, We Were Flying to Chicago, was recently published by Black Balloon Publishing.