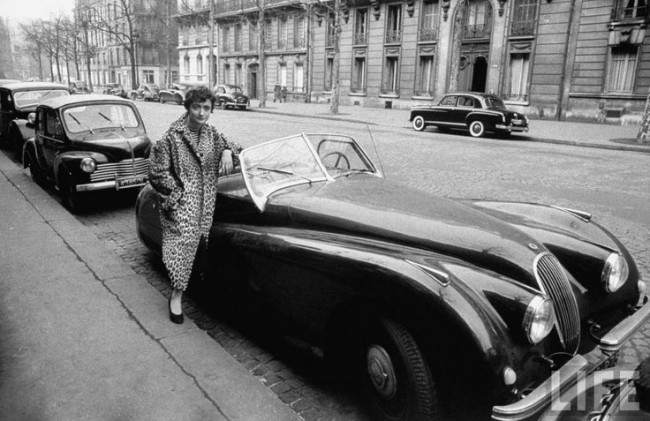 Not one to mince words, Françoise Sagan said, “Whisky, gambling and Ferraris are better than housework.” And she certainly relished three of the four.

Sagan is best known for her slim, stunning 1954 novel Bonjour Tristesse, published when she was only eighteen. The book quickly became a succès de scandale and Sagan became a celebrity. In the novel, seventeen-year-old Cécile is vacationing on the Côte d’Azur with her widowed playboy father Raymond and has her first romantic experiences with an older boy who is a law student. Anne, a close friend of her deceased mother, comes to visit and Anne and her father fall in love. Cécile comes up with a plan to ruin the relationship and have things return to the laissez-faire ambiance that reigned in their holiday house before Anne arrived.

One of Sagan’s first luxury cars in the 1950s — most likely after the success of Bonjour Tristesse — was a Jaguar XK 140 (or an XK 120 by some sources — in either case, a mega-fast gorgeous sports car with record acceleration speeds from 0 to 60 miles per hour in 10.0 seconds for the XK 120 and 8.4 seconds for the XK 140). Sagan is credited to have said, “Money may not buy happiness, but I’d rather cry in a Jaguar than on a bus.”

The Jaguar was just one of numerous sports cars that she had, including an Aston Martin in which she had a serious accident in 1957.  Michael Seidman — author of The Imaginary Revolution: Parisian Students and Workers in 1968 — recounts that someone making a speech asked over the loudspeaker, ”Have you come in a Ferrari, Comrade Sagan?” to which Sagan replied, “No, it’s a Maserati.” 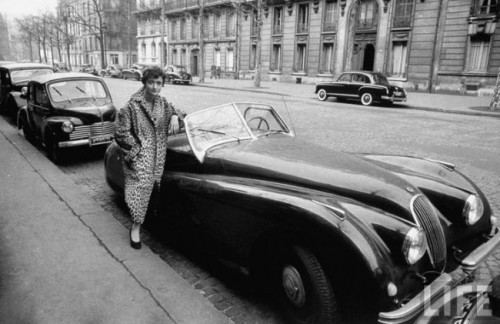 Sagan liked speed. A lot. So much so that she dedicated a chapter to it in her 1984 book of reminisces of famous writers and cherished ideas called With Fondest Regards. In her brief chapter entitled “Speeding,” she writes, “Whoever has not thrilled to speed has not thrilled to life — or perhaps has never loved anyone.” (Over the years, she had a tumultuous love life — two husbands and numerous affairs with both men and women.) She writes about speed as pleasure and this seemed to spill out into other areas of her life that she wrote about in With Fondest Regards: “Games of Chance,” “The Theatre,” and “Saint Tropez.”

Sagan died at age 69 in 2004 and left large debts behind. She also left behind a prodigious output of twenty novels, nine plays, three volumes of short stories, two biographies and many non-fiction collections. And she left behind her personal philosophy, summed up in the last line of “Speeding”: “Well, that is everything that I believe to be true — speed is neither signal, nor proof, nor provocation, nor challenge; it is a surge of happiness.”