Now that we have said a tearful goodbye to our Portland summer campers, we wanted to take a moment to acknowledge those writers who were the recipients of a 2016 Tin House Scholarship. We could not be more excited by the pages they shared with us, as well as the work yet to come. So proud to add them to our scholar marquee. 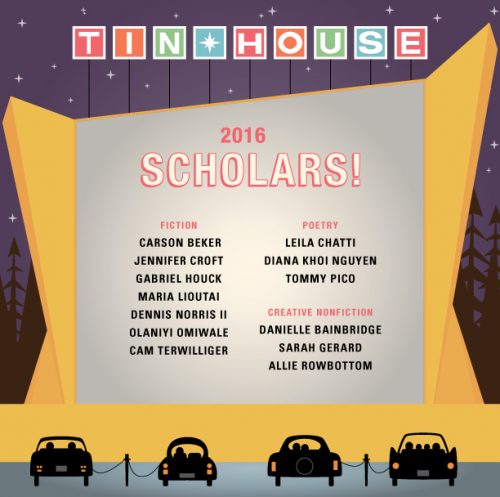 Carson Beker is a writer, playwright, storyteller, and actor with an MFA and MA from SFSU. She is the co-founder of The Escapery, an SF Bay Writing Unschool and has also taught creative writing at San Francisco State University. She is the former Fiction Editor of Fourteen Hills. Her work has appeared in Gigantic Sequins, Sparkle + Blink, Transfer Magazine, and Bourbon Penn, her plays have been at the San Francisco Olympians Festival and at Z Space. She’ll be a 2016 Lamdba Literary Resident in Fiction.

Jennifer Croft is the recipient of Fulbright, PEN, and National Endowment for the Arts grants, as well as the Michael Henry Heim Prize, and her translations from Polish, Spanish, and Ukrainian have appeared in The New York Times, n+1, Electric Literature, BOMB, Guernica, The New Republic and elsewhere. She holds a PhD from Northwestern University and an MFA from the University of Iowa. She is a Founding Editor of The Buenos Aires Review. Read illustrated chapters of her novel—in a wide range of languages—at homesickbook.space.

Gabriel Houck is originally from New Orleans, where his family still lives. He holds MFAs in writing from California Institute of the Arts and from the University of Iowa, and is currently a PhD candidate and Maude Hammond Fling Fellow at the University of Nebraska-Lincoln’s creative writing program. His story, “When the Time Came,” was selected as a distinguished story in the 2015 edition of The Best American Short Stories, edited by T.C. Boyle, and his writing appears in journals such as Mid American Review, Western Humanities Review, Grist, PANK, Moon City Review, The Adirondack Review, Fourteen Hills, Lunch Ticket, and The Pinch. His fiction has also won Mid American Review’s 2014 Sherwood Anderson Fiction Prize, and has earned finalist honors in StoryQuarterly’s 2014 Fiction Prize, among others.

Maria Lioutai was born in Moscow four years before the Soviet Union collapsed. Her childhood consisted of wearing giant bows in her hair, eating borscht, and visiting Lenin in the Red Square mausoleum on school field trips. She now writes short stories in Toronto, Canada. She was on the longlist for both the 2015 and the 2016 CBC short story prize.

Dennis Norris II is a graduate of Haverford College and holds an MFA from Sarah Lawrence College. His writing has appeared in Bound Off: An Online Literary Audio Magazine and Madcap Review. In 2015 he was named a Kimbilio Fiction Fellow and has previously won awards and fellowships from the Hurston/Wright Foundation, the Vermont Studio Center, VONA, and the NYS Summer Writers Institute. He lives in Harlem and is hard at work on a novel.

Olaniyi Omiwale was born in Lagos, Nigeria. He shares his birthday with Fela Kuti, the late Afrobeat pioneer. His favorite writers include Wole Soyinka and Chinua Achebe— both of whom he cursorily read in his childhood but rediscovered with renewed interest in his youth. Olaniyi was also a participating writer at the 2015 Yale Writers’ Conference.

Cam Terwilliger’s fiction and narrative journalism can be found online in American Short Fiction, Electric Literature, The Rumpus, and Narrative, where he was named one of Narrative’s “15 Under 30.” In print, his writing appears in West Branch, Post Road, and Gettysburg Review, among others. His work has been supported by fellowships and scholarships from the Fulbright Program, the James Jones First Novel Fellowship, the Bread Loaf and Sewanee Writers’ Conferences, the Massachusetts Cultural Council, and the Virginia Center for Creative Arts.

Leila Chatti is Tunisian-American dual citizen, who has lived in the United States, Tunisia, and Southern France. She received her M.F.A. in poetry from North Carolina State University, where she was awarded the Academy of American Poets Prize. Her work appears in Best New Poets 2015, Boston Review, North American Review, Narrative, Missouri Review, Gulf Coast, TriQuarterly, and other journals and anthologies, and she serves on the poetry staff at The Adroit Journal. She currently lives with her partner Henrik and their cat in West Bloomfield, Michigan, and will be heading to the Fine Arts Work Center as a writing fellow this fall.

Diana Khoi Nguyen is currently a PhD candidate in creative writing at the University of Denver. Her poems appear or are forthcoming in Poetry, American Poetry Review,PEN America, The Iowa Review, and elsewhere.

Tommy “Teebs” Pico is author of the chapbook app absentMINDR (VERBALVISUAL, 2014), the books IRL (Birds, LLC, 2016), Nature Poem (forthcoming 2017 from Tin House Books), and the zine series Hey, Teebs. He was the founder and editor in chief of birdsong, an antiracist/queer-positive collective, small press, and zine that published art and writing from 2008-2013. He was a Queer/Art/Mentors inaugural fellow, 2013 Lambda Literary fellow in poetry, 2016 Tin House summer poetry scholar, was longlisted for Cosmonauts Avenue’s inaugural poetry prize (judged by Claudia Rankine), and has poems in BOMB, Guernica, the Offing, and elsewhere. Originally from the Viejas Indian reservation of the Kumeyaay nation, he now lives in Brooklyn.

Sarah Gerard is the author of the novel Binary Star (Two Dollar Radio), the forthcoming essay collection Sunshine State (Harper Perennial), and two chapbooks, most recently BFF (Guillotine). Her short stories, essays, interviews, and criticism have appeared in The New York Times, Granta, New York Magazine‘s “The Cut”, The Paris Review Daily, The Los Angeles Review of Books, Bookforum, Joyland, Vice, BOMB Magazine, and other journals, as well as anthologies for Joyland and The Saturday Evening Post. She’s been supported by fellowships and residencies from Yaddo and PlatteForum. She writes a monthly column on artists’ notebooks for Hazlitt and teaches writing in New York City.

Allie Rowbottom was an East Coast based writer, splitting her time between the City lights and her equine companion at his barn. In 2008 she received her bachelor’s degree from NYU’s Gallatin for writing and women’s studies; in 2009 she relocated to the West to attend the California Institute of the Arts to continue nurturing these pursuits. She now lives in Houston pursuing her Phd.