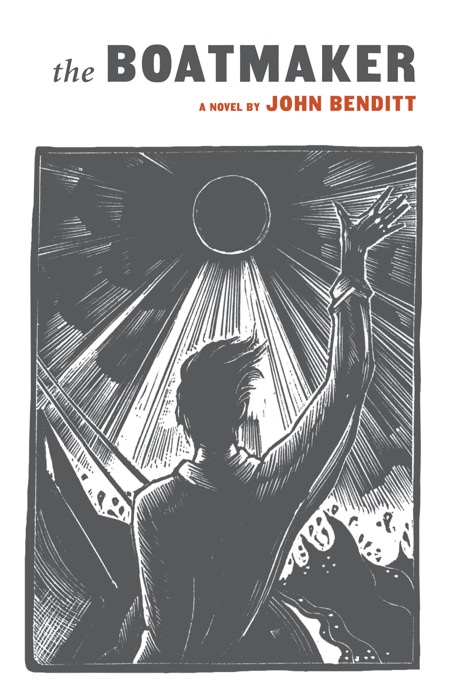 A fierce and complicated man wakes from a fever dream compelled to build a boat and sail away from the isolated island where he was born. Encountering the wider world for the first time, the reluctant hero falls into a destructive love affair, is swept up into a fanatical religious movement, and finds himself a witness to racial hatred unlike anything he’s ever known. The boatmaker is tempted, beaten, and betrayed: his journey marked by chilling episodes of violence and horror while he struggles to summon the strength to make his own way.

Out this week from Tin House Books, John Benditt’s The Boatmaker is a fable for our times, a passionate love story, and an odyssey of self-discovery.

We sat down with the author to discuss the inspiration and influences that preceded his novel.

Tin House: How did this novel begin? What was the impetus for writing it?

John Benditt: The Boatmaker actually grew out of a short story I wrote for a writing workshop I was taking in New York. At the time I thought I was writing a collection of short stories. This one—which was about the boatmaker on Small Island—felt different from and better than the others. The response from the folks in the workshop seemed to confirm that. I was pleased, but I thought that was all there was to it. I put the story in the collection. A little while later I had an idea for another story about the same boatmaker—this one set on Big Island. Then I thought I was really done with him. But he wasn’t done with me: I began envisioning bits and pieces of things that happened to him on the Mainland.

TH: What sorts of works inspired it?

JB: I think one of the important things about The Boatmaker is its tone. That tone comes from some things that influenced me a long time ago. And not all of them are novels. In fact, of the three that come to mind, none of them is a novel. One is the writing of Robert Creeley, whose poetry I loved beyond all others when I was about nineteen or twenty. A few years later, two other works, again neither a novel, had a big influence on me—and I think their tone resurfaced in The Boatmaker. One is an album by Neil Young called After the Gold Rush. The other is the film McCabe and Mrs. Miller by Robert Altman. 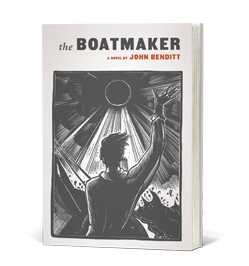 TH: The Boatmaker is an expansive work, covering an array of themes: religion, imperialism, industrialism, self-discovery, cults, love. Is there one theme that you feel defines the core of the book?

JB: In my opinion the one theme that connects all the others is that of becoming who you really are. After all, a drunken carpenter from a little island at the end of the world would seem an unlikely person to have a large and unusual destiny. And probably most worldly and experienced observers would have predicted, if they had seen him before he sailed away from Small Island, that he would wind up right where he was born as a sad old drunk who had once been a wonderful worker in wood. But something in the boatmaker pushes him out into the wider world in search of something. And although he makes some large and very painful mistakes along the way, he never gives up. I think that process is at the core of the book.

TH: You have had a career as a science journalist and editor. How did your science writing influence your fiction writing? Has your background been a significant influence on this book?

JB: Although as an editor I edited stories on a huge range of topics, the two areas I was most interested in personally were biology and social science. I was always interested in how things are interconnected—which is the essence of a society or a species—and in how the present is layered over the past. The field that combines those things in the most concrete way is probably archaeology, and for a time I was the editor at Scientific American who handled all the major, scientist-written articles on archaeology. I loved that. And I think you can see some of that in the novel: the interconnection of apparently disparate things and the way the past still exists, many layers deep, in us as individuals and in our society.

TH: The boatmaker’s story is not set in a specific time or place and yet it is clearly based on the history of European Jews. Did you do much research for the book?

JB: I didn’t do any research in the explicit sense for the book. But I do think that I have always read in a certain way that reflects my upbringing as a Jew, albeit a pretty secular one. For example, I read Proust to some extent as the experience of someone who is privileged and aristocratic, but also aware that he is in some way Jewish and therefore vulnerable. I’m sure Proust would have denied that he was a Jew, but I think he was deeply aware of his mother’s Jewishness in a way that made him both sensitive and vulnerable. In that he was not unlike Jacob and Rachel Lippsted—an aristocratic brother and sister the boatmaker encounters on the Mainland. So I read through Jewish eyes, as it were. At the same time, I have often been drawn to the idea of becoming a priest. Perhaps this is a bit contradictory.

TH: The lack of specific details that would identify a time period and setting gives the book an episodic and fable-like tone. Was it your intention to write the book this way?

JB: Yes and no. On the one hand, as I mentioned, I didn’t know for quite some time that I was writing a novel, so I didn’t have a plan—for the tone, the story or the characters—that would make up the novel in its final form. On the other hand, even in that original short story I mentioned, one of the things I liked was the fact that while things on Small Island were quite concrete—the sea was cold, people were grimy, men got drunk and stabbed each other in the bars in Harbortown and when they did, they bled into the sawdust on the floor—at the same time it wasn’t an identifiable place or time. I liked that and that did remain from the original short story.

TH: What are you working on now?

JB: I’m working on a collection of short stories. They’re connected, but they all stand alone.

John Benditt had a distinguished career as a science journalist. He was an editor at Scientific American and at Science before serving as editor in chief of Technology Review. The Boatmaker is his debut novel.

Border Crossings: A conversation between Forrest Gander and John Benditt