The chef said he would make a special dinner for us, the American honeymooners. It was our first night at Lake Pátzcuaro, Mexico, and we were the inn’s first guests and this was the restaurant’s first big meal, the afternoon comida, the gastronomic heart of Mexican life. The chef was enthusiastic.

I envisioned a bubbling stew brimming in an earthenware pot, steam lifting with a woody spiciness that hinted at its forest origins. I wanted to know about that spice’s journey to my table. Had the chef hand-carried the herb, perhaps the umbels of a rare plant that blooms only once, under a full moon, down a mountain around his neck in an alpaca hair pouch? Maybe that was romantic, but all food has a story and I wanted to experience a novel’s worth, translated in my mouth.

On the lawn outside our room, a barbecue flamed and hissed into the lakeside air. And behind it, our chef, grilling up what seemed like… Texas-style short ribs, slathered with a ketchup-based barbecue sauce? The aroma reminded me of childhood. An acrid sweetness that had coated most every barbecued rib I’d known. I scanned the chef’s provisions for a bottle of Heinz, as he asked us to not say a word until we’d sampled all his carefully researched dishes, allowing the flavors to first mingle and settle on our tongues. 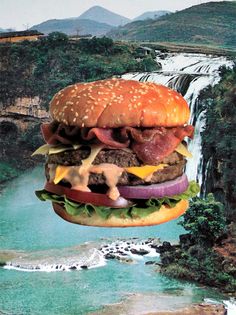 His research produced for us a bowl of mayo-rich potato salad, spiked with crunchy bites of celery that would make my Kentucky aunts nod in approval. There was corn on the cob, duly dripping streams of salted butter onto flowery hand-painted terracotta plates. (And I had been so hoping to taste Mexico’s traditional dusting of chili powder and crumbles of cotija cheese.) There was even coleslaw worthy of a Fourth of July potluck, shards of orange carrot and purple cabbage strewn throughout like celebratory streamers. (I couldn’t break the chef’s heart to tell him coleslaw was actually a Dutch tradition brought to the States by settlers, but instead confirmed that, yes, Americans do like coleslaw very much.) It was an all-American picnic in the middle of Michoacán. And it was good, but I left that place hungry, still thirsting to understand what tastes excited local chefs, where our palates intersected, where each was likely to provoke and entice the other.

Flash forward to Papeete, Tahiti. It was midnight at the airport. The brother of a friend piled fragrant leis of frangipani around our necks, flower layers building until the petals tickled our ears. We rode through the night in the back of a pickup truck, swaddled in scent, the songs of unfamiliar insects punctuating the darkness, papaya fields blurring past. When we arrived at the family home, deep in the countryside, we learned it had been emptied for the visiting Americans—not only had an auntie and uncle given up their bed, they’d donated their entire house.

The next morning, our host tapped on the screen door. He wanted to treat us to breakfast. His generosity had already humbled us into perpetual gratitude, but we weren’t about to pass up a Polynesian Sunday brunch. Tahiti had similarities in cuisine to my home of Hawaii, but Polynesia also had a long and intimate relationship with France, which meant where Hawaii’s cuisine had combined with influences from Asia, Portugal, the Philippines, Tahiti had slid into bed alongside les Français, whose sensual palates had drifted far across land and sea to infuse the food of these balmy islands. In Hawaii, one of the beloved local mainstays is poke—raw fish, typically ‘ahi tuna, steeped in a basic blend of sesame oil, ground kukui nut, and crunchy strings of seaweed. Here, the raw fish equivalent was a coconut-creamy, lime-marinated French-Tahitian poisson cru. And had I heard that Tahitians stuffed salty French fries in the middle of their baguette sandwiches, their casse-croûtes? Euro-Pacific fusion at its kitschy best.

Our culinary tour began at an oceanside stand with fresh coconuts, cracked open with the whack of a sharp machete. I chased the luscious, jelly-like spoon meat around a nut’s hollow insides, let it sweetness slip down my throat. A little boy ran back and forth across a heap of discarded husks and shells, a tiny dog barking over the excitement of his rapid feet. With salt-misted face, I anticipated the delicacies that might greet us next.

There is only one road that circumnavigates Tahiti’s main island, and not much farther along it we pulled into a gravel lot beside a busy restaurant. Our host looked over his shoulder at us, smiling, as if no longer able to keep his secret. The car had led us directly to a looming pair of golden arches, which could mean only one thing in any language: We were about to brunch on charbroiled hamburgers at McDonald’s. My imagination took a serious left turn. I quickly substituted hopes of butter sauces balanced with a tangy squeeze of tropical fruits, and cassoulets embracing a local fisherman’s morning catch, with machine-pressed patties and limp pickle chips. There was a line out the door.

So it was only reasonable then, when we later traveled to Thailand’s northwest corner—a country known across the map for its exceptional cuisine—and we found ourselves at 11:00 p.m. on a quiet July fourth in the tiny town of Pai, that my husband and I were hungry, starving, for anything not reminiscent of our own patriotic barbecue.

“You still serving food?” my husband asked a squat, heavyset man leaning in the doorway of what appeared to be the only open café in this empty town. The man boasted a Mohawk and wore a pink sweatband around his wrist. He looked like a WWF wrestler on break.

“You still have music?” My husband pointed to a handmade sign. A chicken squawked and scrabbled in the dirt and leaves beneath the closest tree.

I swallowed a laugh. Did he really barbecue his noodles? Did he throw the word barbecue in front of his actually, authentically, regional cuisine when he heard our accents? Was I getting paranoid?

The wrestler led us inside to a handsome carved wooden table. Our waiter, a delicate man with perfect, painted fingernails, placed a tray before us without asking for our order—one Singha beer, two glasses, a silver bucket with ice. In the shadows against a far wall, a ponytailed singer straddled a bar stool, guitar swinging from his chest. He looked up, then pulled his stool into a dim puddle of nearby light and began strumming an Eagles tune.

The wrestler emerged from the kitchen, the weight of a coal-burning grill in both hands, and I felt like clapping. The “barbecue” was more Korean yakiniku than tabletop Coleman, and it had landed in the middle of our table. With a fork, he speared a hefty cube of pig fat and rubbed it back and forth across the burner, until it sizzled and oozed and I possibly audibly ahh’d. His assistant poured, from a burnished kettle, an herb-fragrant broth into the moat that surrounded the smoking coals. The wrestler slowly lifted an egg above his head and brought it down with a crack! on the metal tureen. Strands of gold and milky white raced into the broth, swirling and solidifying in the steaming brew.

Silver plates appeared between us—one layered with thin-sliced raw meats in vibrant shades of burgundy, crimson, and rose; another loaded with spikey herbs I didn’t recognize (I pinched one and smelled it: camphorous, clovelike); fresh raw noodles tangled together in an edible nest.

The wrestler raised his hands, palms out, to say the rest was our adventure. And it was, unlike any barbecue I’d ever experienced. In fact, the experience was all that mattered to me. Not the origins of the ingredients, not the history of their preparation. I wanted to live inside this moment, the boundaries melting between them and us, tradition and now. Maybe all culinary travel becomes fusion by default as we become part of each experience. Somewhere between the foreign and familiar, we long to learn, please, even surprise each other—to become ingredients ourselves in a memory worth recounting from afar.

The wrestler asked where we were from.“America, but you were born … yes, California? Can I sing you … I will sing you, yes … ‘Hotel California.’ Yes!”

He retied the back of his apron and took the microphone with one hand, as the guitarist played the first familiar chords. Images of a white-shirted Don Henley collided in my head with those of an apron-wearing Thai wrestler, but I had to sing along. The cool wind blew through our entangled hair as we sped down a dark, deserted highway together, a shimmering light in the distance, my expectations blown clear out the open window.

It was the best Fourth of July barbecue I’ve ever had.

Kirsten Whatley (@kirsten_whatley) is a Hawaii-based writer. Her essays and articles have appeared in Orion, Northern Lights, River Teeth, Wine & Spirits, The Washington Post, Honolulu Magazine, the Pacific writing anthology Ho‘olaule‘a, and elsewhere. She is the author of Preserving Paradise, a guide to Hawaii’s environmental volunteering opportunities (Island Heritage Publishing), winner of a merit award for Best Travel Guide from the North American Travel Journalists Association.