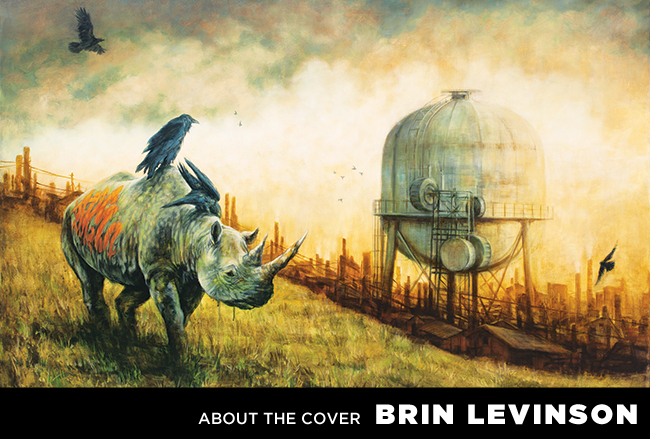 In the war between man and the natural world, it would appear, judging from Brin Levinson’s unpeopled, postapocalyptic cityscapes, nature has won. Levinson’s worlds—washed in dour grays, ochre, and sepia brown—suggest the landscape before us is already becoming a relic. The brightest colors, the occasional burst of blue sky that breaks out from behind cloud-crowded sky, the flash of red graffiti on a rhino, pop off the canvas.

You can see the influence that Portland’s industrial areas and older architecture have had on Levinson, particularly the city’s multiple bridges—Hawthorne, the Steel Bridge, St. Johns—near which the deer and the zebra roam, while wildebeests graze in the city’s Chinatown, and beneath an underpass in a switching yard, a tagged walrus, big as a train car, appears to rest his weary flippers. With the skyline of the deserted city in the distance, an abandoned ship lists in a nearly dry riverbed, a pair of elephants posing like refugees from Noah’s Ark. There is something comic in this, as in the image of a giant white rabbit apparently about to topple a water tower. Outside of the city, dirigibles as big as whales glide past a pretty blue Victorian house, while in the foreground a gold bird, beak wide open, is either belting out a song or a warning.

“I combine fragments of realism and imagination in my images to create a world balanced on the edge of familiar and foreign,” Levinson says. “I attempt to create a dreamlike scene of one suspended moment and leave an open-endedness to the story.”

On top of this incredible cover, we’re also thrilled to announce that we’re now able to fulfill digital subscriptions to the magazine. Every new print subscription comes with access to the digital version, which you can enjoy alone for $19.95. This has been a long time coming and we hope you’ll continue to enjoy the magazine in whatever format you prefer.

The Ecstatic Issue is here!