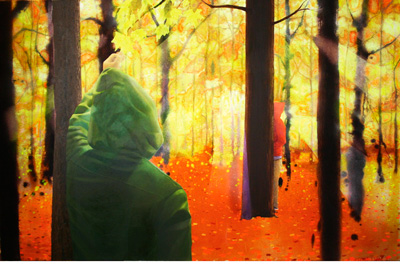 “I tend to think that creative people exist in an altered state of consciousness,” Matt Hansel says. “I’m not saying being an artist is like constantly being high (not to diminish the inextricable link between the two). What I mean is there is a certain awareness or clarity that allows artists to see things a certain way.” Hansel’s ability to illuminate those rare moments of heightened awareness ordinary people experience is evident in his painting The Magic and the Mundane, part of his 2007 series, Youth Is Wasted. Hansel’s stoned, alienated, hoodie-wearing adolescents long to escape reality, yearning, it seems, to connect with a force beyond them, be it another human being or something mystical. The act of creating art, Hansel attests, can be just that sort of escape: “When I’m deep in a painting, I feel like everything is firing at once. Often I’ll just get started in the studio and look up to find I’ve been working for hours. It’s a total immersion where everything else falls away.” In the nearly five years since Hansel painted The Magic and the Mundane, his work has taken a new path, away from the realistic and down the rabbit hole into a Felliniesque psychedelic realm of what he calls “historicalish, or paintings of historical moments that never happened.” One might expect, given his early subject matter—burned-out youth—and the fantastical nature of his newest work—circuslike spectacles including lumberjacks, elephants, and colonial soldiers—that Hansel himself indulges in mood-altering, perception-warping substances to create. On the contrary, he says, “I’m amazed that people can make work under the influence. Adding any more sensory experiences to the act of making art would put me on overload.”

To get turned on to more of Matt Hansel’s work, visit him online.

About the Cover: This Means War