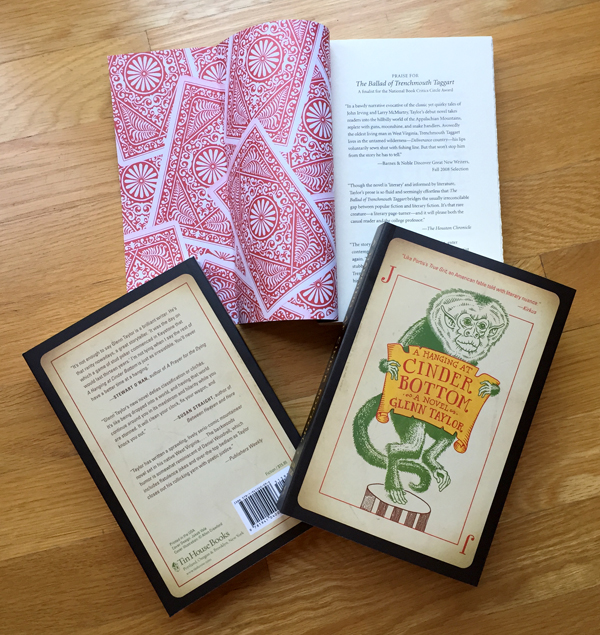 Some cover designs feel impossible until the final moment, when each person’s vision aligns. Other covers are so straightforward that we, in the art department, hold our collective breath and wait for something to go awry. The design process for A Hanging at Cinder Bottom was as smooth as its poker-playing protagonist, Abe Baach.

I’ll admit to being a tad nervous when I sat down to read the manuscript and saw that Glenn Taylor had already sent along a cover idea. Author input is important, but I worried he’d set his mind on a direction too early in the game. Fortunately, Glenn’s idea was an instant hit in the office. While researching, he’d spotted a monkey-decorated joker card in The Hochman Encyclopedia of American Playing Cards. It stuck with him and inspired the devil-backed playing card passed between two characters. The image also references the character of Baz, a capuchin monkey. 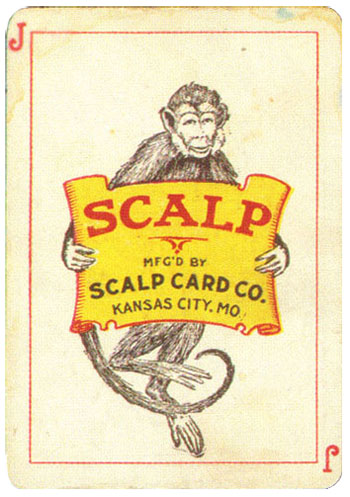 While the original card is charming, it doesn’t quite match the feel of the book. So we commissioned Allen Crawford, the intrepid illustrator of Whitman Illuminated, to create a custom image. We gave him the original card as well as Glenn’s description, from the book:

Little Donnie studied the card. No black ink was used in its manufacture. It was a three-color print, primarily red. Its yellow company sign was bright as summer squash and was held by a dancing green monkey on a pedestal, while the pedestal was striped in a color that was neither red nor green nor yellow. 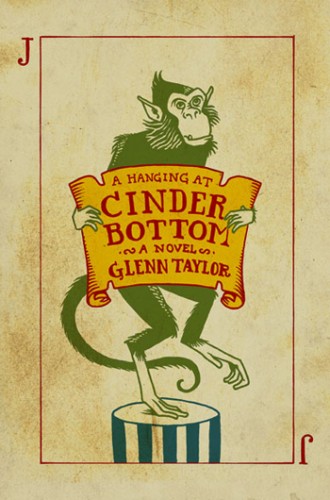 Allen’s initial sketch was wonderful, but I had a list of my own nitpicky requests: more texture, rougher linework, move the monkey’s paw, etc. The monkey felt too playful. In the book, Baz is described as being a 41 year-old, white-faced capuchin. He’s friendly, but fiercely protective of his owner. Capuchins tend to resemble old men so Allen added a little wisdom and removed the snaggletooth. 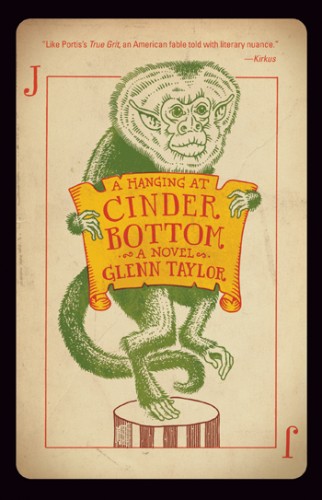 Allen’s next iteration was exactly what I’d pictured. To add authenticity, he colored the final art as if he’d used the three-ink printing process described in the book. The color of the pedestal was made by layering red and green.

The card in the book also contains a secret message, only readable with a magnifier. Allen changed the stripes in the pedestal so I could make space for the text.

Little Donnie brought the card close, the lines an inch from his left eye, the one folks referred to as “lazy.” It was anything but. It rolled sometimes, but it could see things no one else could. On that night, in the striped pedestal of the devil-monkey, the eye saw:

Tell Trent I gave you

Come to saloon back door

on Friday 4 am sleep break

Cinder Bottom editor, Tony Perez and I were excited about including this detail, but we weren’t sure it would turn out. After a bit of experimenting and a trip to the toy store, to purchase a magnifying glass, we were satisfied with the outcome.

Allen had also drawn a beautiful back for our card that I’d hoped to include on the back cover. In the end, we didn’t have space, but I couldn’t let it go to waste. I turned it into a pattern of scattered cards and we printed the image on the inside cover, as faux endpapers. 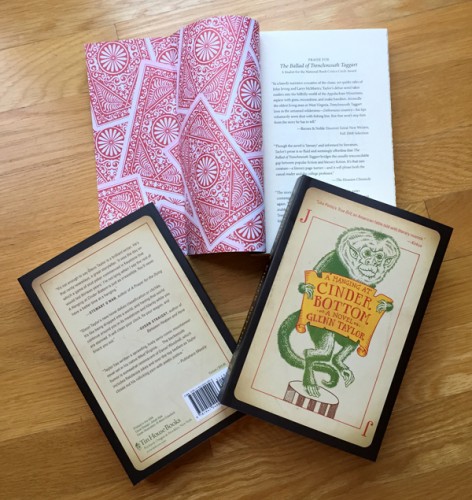 We ended up with a cover we’re all happy with—one that jumps off the shelf, while remaining true to the story.

Jakob Vala is the graphic designer at Tin House. He grew up in a small cabin in the middle of the woods and attended a one-room schoolhouse where he learned to bake soufflés and recite Shakespeare. He has a BFA in Communication Design from Pacific Northwest College of Art.

The Celestials: An Excerpt

The Revolution of Every Day: An Excerpt