Essayist, editor, translator, political commentator, and occasional poet—Eliot Weinberger is one of this century’s busiest literary polymaths. Whether cataloging the translation history of a single poem, or tracing the influence of classical Chinese poetry on the European avant-garde, or even reading George W. Bush’s memoir through the critical lens of Michel Foucault, Weinberger brings a fierce erudition to bear on each of his varied subjects. His essay collection The Ghosts of Birds—newly published alongside a reissue of his now classic Nineteen Ways of Looking at Wang Wei, a close reading of different English translations of a single Wang Wei poem from the Tang Dynasty—is a sprawling record of found poetry, cultural encounters, and historical anecdotes, all of which Weinberger, ever the modernist, makes something like new again.

Hal Hlavinka: Nineteen Ways of Looking at Wang Wei was originally published three decades ago, when literary translation was still very much an activity at the margins of the market. Were there any specific developments in the translation community— methodological, cultural, social; or perhaps a fight or two—that you considered when drafting the new section of the book?

Eliot Weinberger: It’s true that since the book was written in 1979 (and published in book form in 1986) there is now a greater recognition of translators, excellent presses devoted to translation, and an academic industry (which I avoid) of conferences and works of translation theory. But when it came to expanding the book for the new edition, none of this mattered. What I found interesting is that the English translations in recent decades are all written with an awareness of the original book—that is, of the many previous translations of the poem. So there’s a pressure to come up with something new, which isn’t easy. (And, for those who remember the old book, the new one has more wacky stories about my nemesis, the Furious Professor, the one who accused me of “crimes against Chinese poetry.”)

HH: The combination of fragments, translations, and poems that make up An Elemental Thing—the serial essay which comprises part one of The Ghosts of Birds—are striking in how disparate yet oddly comfortable they seem when set aside one another. What draws you to a particular piece that ends up in the project?

EW: The idea was to write a serial essay, in the manner of the American open-ended serial poem, which can go on forever. The subjects keep changing from essay to essay, but images and even phrases repeat. Maybe that’s why they’re “oddly comfortable.” I’m glad you think so. I always want my books to be a kind of couch. You read a few pages in the late afternoon, fall asleep, and have a memorable dream.

HH: Several of the essays and pieces you originally wrote for exhibition catalogs. How does your compositional process change when you’re collaborating with another artist, particularly when you’re bringing text to accompany a visual medium?

EW: I love collaborating with visual artists, but the understanding is that I will not write directly on their work—I’m not an art critic—but rather will write something somehow inspired by their work, a kind of parallel text. In this book are collaborations with two artists: the Cuban-American Teresita Fernández and the Maori painter Shane Cotton, both of whom contacted me out of the blue. In Teresita’s studio, I saw crates and crates of rocks that she uses for her installations and a work in progress of 31 small gold-plated metal rectangles, partially painted over in black ink, which were intended as a calendar. So I decided to do a calendar of stones—ordinary stones, not precious ones. But mine is a lunar calendar, with 28 sections, and the whole thing waxes and wanes: the texts grow longer up to #14 and start getting shorter after #15. In the case of Shane Cotton, I incorporated some of his imagery of birds, rock cliffs, and Maori translations of the Bible into my text. But mainly his work sent me into Maori bird lore and the stories of various birds that no longer exist, that now are ghosts. 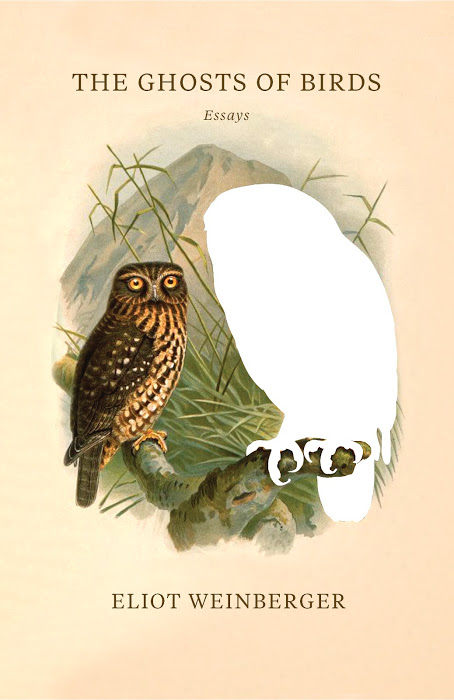 HH: Your essay “Béla Balázs’s Chinese Dreams” begins with a glancing definition of one of modernism’s goals: “In the first decades of the 20th century, a committed modernist had two ambitions: to make something new and to recover something old.” This strikes me as an apt description of your own work. Do you think of your project as an extension of a modernist aesthetic?

EW: Yeah I’m just an old-fashioned modernist, not very happy with postmodernism, whatever that is. Modernism always played with the tension between sincerity and irony, between making connections and severing them. Now, at least in the avant-garde—whatever that is—it’s all irony, which I find tedious. A writer is not smarter than literature.

HH: I found myself often overwhelmed by the odd historical details you find, which stick out in the mind long after reading. I’m thinking of things like the bone from Josaphat’s spine that closes “That Impostor Known as the Buddha,” or the grandfather clock without a pendulum or weights in “William Sharpe,” or the anecdotal shape of “The Wall.” When you’re reading or researching, what is it about a specific detail that clicks for you—that you know it might echo loudly in a piece?

EW: I try to write my essays like poetry, listening to the sound, trying to include telling images. There are no rules or general description for these details. They hit me when, in my research, I discover them and, as a writer, I hope they’ll hit someone else.

HH: Your work has a restless, world-devouring quality that’s hard to pin to any specific critical genealogy, perhaps aside from Pound. Who would you estimate looms the largest behind the recent work in The Ghosts of Birds?

EW: Well, no one. There are cases where a certain writer is tremendously influential on another, but I don’t think that’s a universal rule, and it has been vastly overrated—as has anxiety. (I, for one, feel anxious about everything except writing, which I find oddly calming.) When I was a teenager, DH Lawrence’s Studies in Classic American Literature and the writings of Artaud first opened my mind to the possibilities of the essay, but obviously I don’t write like either. My model for the narrative bits of my essays is the Icelandic sagas. My models for condensing large amounts of information are Lorine Niedecker and Charles Reznikoff. And everything else comes from poets.

HH: Aside from the stories and fragments that you clearly take in by the hundreds, are you a collector of any kind? Rocks and minerals, perhaps? Or maybe you’re a birder? Everyone’s a birder these days.

EW: I don’t collect anything, except dust, even books—in the sense that my books are for reading, and are not acquired because of their rarity. I love watching birds, but am not a bird-watcher. (I once said this to Jonathan Franzen, passing the time as we coincidentally were waiting by the luggage carousel in the Sydney airport, and he looked at me with utter disdain.)

Catch Eliot Weinberger in conversation with Justin Taylor this Sunday, Oct. 23rd,
at 7:30 at Powell’s in Portland!

Eliot Weinberger has published books of literary essays and political commentary, anthologies of poetry, and translations of Latin American and Chinese literature with New Directions since 1976. He is the series editor of Calligrams: Writings from and on China and the literary editor of the Murty Classical Library of India.

Hal Hlavinka is a writer and critic living in New York City, where he works as the event coordinator at Community Bookstore. His work has appeared in BOMB Magazine, Music & Literature, and The Quarterly Conversation, among other places.

The Faltering Defense of Self: An Interview with Leslie Jamison