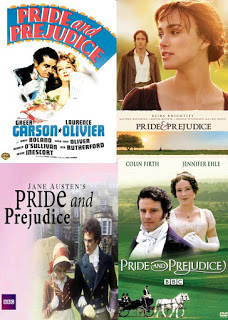 If a modern film version of Pride and Prejudice were produced today, some of the main characters should be gay, Elizabeth and Darcy should not get married at the end, and Charlotte Lucas should be played by a tabby cat. At least, those were the conclusions made by students in a college course I taught last winter. The course covered film adaptations of Pride and Prejudice, from the 1940 Laurence Olivier and Greer Garson version, up through Bollywood’s Bride and Prejudice and Bridget Jones’ Diary, (with plenty of time for Colin Firth and Keira Knightley along the way). By the end, each student had to write a twelve-page pitch for a new film, with results ranging from Kung Fu Prejudice and Elizabeth Bennet, Superhero, to a creative mash-up of P&P and The Great Gatsby.

Undergraduates, especially English majors, tend to be very good at applying the lessons of literature to their lives, and Jane Austen’s world of courtship and marriage provides a stark contrast to the hookup culture on today’s college campuses. As one young woman put it: “I wish I had a Mr. Darcy pining for me, but that is not how the real world works, which is depressing at times. I also do not have the opportunity to go to balls and dance with eligible bachelors. Instead I am stuck in fraternity basement parties, with sweaty frat boys grinding against me to sexist rap music.” She didn’t want to live in Austen’s world, but she had no illusions about her own.

I appreciated my students’ openness as they crafted their final papers, but I can’t say that I was equally forthcoming. I didn’t mind sharing my oldest daughter’s impressions of college parties, or the culture my other girls were encountering at our local high school. But I never mentioned the messy truth about my own life—that once a week after class I was driving over to a lawyer’s office to hammer through the last stages of a protracted divorce.

Reading Pride and Prejudice—and watching all those films—is a grim exercise when you’re going through a divorce. You tend to get a little cynical about Elizabeth and Darcy’s prospects for long-term compatibility. Most days I found myself sympathizing with Mr. Bennet, the bookish father who retreats to his library to avoid his flighty spouse’s chatter. That was me—the studious English professor with the happy-go-lucky husband, fretting over family finances while my soon-to-be-ex flew our three daughters down to Florida for a spree of multiple amusement parks.

I met my husband when I was in college, the summer after my sophomore year. He lived in Washington while I was studying in Boston, so we maintained a long distance relationship for two years, then got married one month after my graduation. Only one of my college friends told me directly that she thought I was crazy to get married so young. My students, however, were much more clear—young women who get married in their early twenties, especially right out of college, are nuts.

Early marriages, they insisted, might make sense for couples like Pride and Prejudice’s Jane and Bingley, who are blandly cheerful, traditional and hopelessly naïve. But Elizabeth and Darcy? By the novel’s end they’ve known each other for less than a year, and Elizabeth, as she tells Lady Catherine, is “not yet one and twenty.” In the twenty-first century, Elizabeth and Darcy would be well-educated and ambitious, eager to establish their careers before marrying. They would certainly have sex, see each other steadily, and maybe even live together for a few years. But marriage, according to my class, would have to wait.

I don’t know that the later marriages of career-driven couples have any more chance of success than the early matches of previous generations. My own marriage lasted for twenty-five years. Still, deferring matrimony does give young people, especially women, a chance to develop as individuals, to live on their own, and to understand what they really want from a life partner—questions I had delayed until my late forties.

My class had strong opinions about life partners. For instance, why should we assume that a modern Elizabeth would marry a man? Darcy is a fine name for a woman, and several students who were planning rom-com films imagined Elizabeth and Darcy as a happy lesbian couple.

That made sense to me, given the social life I was experiencing at the time. Getting divorced is an exercise in female bonding. Over the two years of my separation I’d been introduced to a whole new circle of wonderful women—mostly divorced—all wanting to avoid being the singleton at couples’ parties. I’d been to wine tastings with divorced women, concerts with divorced women, cafes in Paris and New York with divorced women. I’d lingered in a Turkish bath in Istanbul with a divorced woman. If we had all been gay or bisexual, the romantic possibilities would have been endless.

Instead we sat around getting mildly drunk while we laughed about bad dates, no dates, and Match.com vs. Eharmony.

Charlotte Lucas would have been welcome in our midst. She’s the ultimate female friend in Pride and Prejudice, the twenty-seven-year-old living under the shadow of spinsterhood (a mirror of Jane Austen’s situation), whose expectations, she tells Elizabeth, are “not romantic.” As she famously pronounces: “Happiness in marriage is entirely a matter of chance. If the dispositions of the parties are ever so well known to each other, or ever so similar beforehand, it does not advance their felicity in the least. They always contrive to grow sufficiently unlike afterwards to have their share of vexation; and it is better to know as little as possible of the defects of the person with whom you are to pass your life.”

In a contemporary setting, Charlotte Lucas would never have to get married. She would not be pressured by familial and social norms to accept a fool. Instead of bowing to bleak marital prospects, she might become a media mogul, or a brain surgeon, or a human rights barrister, like Will Darcy in Bridget. She might even become a novelist—Jane Austen’s modern equivalent.

Or, as one student suggested, she might be a tabby cat. After all, her chief purpose in the novel’s first volume is to be the heroine’s friend and confidante—a role played by many cats in the new millennium. A feline Charlotte Lucas could go viral on YouTube. My cat-oriented student envisioned a career-minded Elizabeth with little time for her pet, allowing “Colin” to adopt Charlotte as a consolation prize after his failed proposal. The cat would provide company as he settled in a new city.

The one lesson from Pride and Prejudice that all of my students quickly grasped is that although Austen is a master at portraying human relationships, she’s not a blind advocate of marriage; happy unions are rare in her novels. Not only does Mr. Bennet regret his youthful infatuation with a pretty girl, Mr. Palmer in Sense and Sensibility retreats behind a newspaper to block out his wife’s drivel, while John Dashwood whittles his stepsisters’ inheritance down to almost nothing because of the machinations of his greedy wife. Nor are Austen’s bad spouses predominantly women. Readers of Northanger Abbey and Persuasion can imagine how General Tilney and Sir Walter Elliot must have made their wives miserable long before those women died. One suspects that Austen filled her novels with widows and widowers not from a sense of morbid realism, but to avoid depicting a world full of blighted marriages.

Of course there are exceptions to the general gloom: Mr. and Mrs. Jennings in Sense and Sensibility seem boisterously compatible, and the perfectly paired Gardiners in Pride and Prejudice offer Elizabeth a model of conjugal felicity. I myself was envious of such models. My separation had made me hypertuned to marital happiness—sharply aware of its presence and absence in the lives of others. I still am somewhat awed whenever I encounter a genuinely well-matched couple. To construct a solid, lasting relationship based on mental, emotional, and physical partnership is an amazing feat.

As for herself, Jane Austen refused the one promising offer of marriage in her life. It was made by the shy, wealthy brother of her close friends, a man named Harris Bigg-Wither. With him, Austen could have been a rich mistress of a great estate. She could have been a wife and possibly a mother, settled in a family where she already felt comfortable. But she probably couldn’t have been a novelist, and she didn’t love Harris. Some say she loved an Irishman, Tom Lefroy, with whom she’d enjoyed a brief flirtation years earlier. None of that is certain. What’s certain is that after accepting Harris’s proposal one evening, Jane turned around the next morning and revoked her promise, then fled the house in embarrassment.

In the end, she wound up living with her unmarried sister, her widowed mother, and a single friend of the family, Martha Lloyd, in a modest cottage. In other words, Jane Austen settled for books and female company—the perennial solace of single women.

And maybe that’s not such a bad life after all.

Laura Fairchild is the author of four books—nonfiction, memoir, and novels—published under her married name, Laura Brodie. Her works include: Breaking Out: VMI and the Coming of Women (Pantheon and Vintage 2000, 2001), Love in a Time of Homeschooling  (Harper and Harperperennial 2008, 2009), The Widow’s Season (2006) and All the Truth (2012)—both published by Berkley Books. Her writing has been featured and reviewed in media outlets ranging from The Washington Post and The Los Angeles Times, to CNN and The Diane Rehm Show. A professor of English at Washington and Lee University, she is currently working on a book about Jane Austen and the hookup culture.