This is how easy it was:

I saw a cartoon of two mice fucking and thought of you and let myself think “us.”

And because a mouse on its back called out: “This feels so right!” And because this phrase so nearly echoed the things I’d repeated in my own mind while lying on my back, reimagining you filling the space I carved out of myself and how right it felt at the time that I felt it, I began to question the rightness of the feeling I was reimagining in which you were participating in absentia. Your notbeing standing in for being. And because I’d begun to doubt my own recollections and their validity, and the colors I’d applied to my memory of the shadows that compose you, I wanted to find something concrete to fill the gaps.

And so I looked up lingerie on Ebay and jerked off to Asians in four dollar heart-shaped pasties. Three times.

And went to sleep in the mess.

Everything took on the nebulous hue of an affair.

Because sometimes, while another lover prepared breakfast, I wanted to fuck you in a snowbank.

Other times, I caught a glimpse of my reflection in a window.

Startled by the image, I’d believe for a moment that I was not alone.

The pornographic everyday of everyday. Everyday.

Just as every sentence and song and landscape gained meaning from its orbit around you, you changed only in relation to myself. You were the recipient of all the overwrought lyrics on the Smiths CD that had been skipping on my car stereo for years, and the mood I projected on the condiments growing pillowy clouds of mold in my refrigerator and I wondered how my life would look through your eyes and if you’d ever see it. But that didn’t matter, either. Your ideas were just thoughts I presented on your behalf in the endless conversation we carried on in my mind.

But why do I say we when I mean I emptied myself into the idea of you.

Perhaps this was the source of my shame: I could no longer delineate between you and my thoughts of you, which is to say myself. 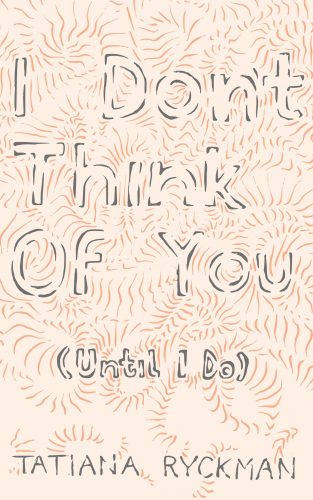 At the base of a mountain I made a list of the things I was still able to think of without you.

Each object a safe place to remember the world existed before you became it, but as soon I asked the hairbrush to define itself by its notyouness it inherited a new way of being you. The stories I imagined of your own relationship to these objects erased my memories of them. You were the things that are you and the things that are not you and the thin lines that connect all of these.

I am not a cannibal, but how else could I execute the full expression of my desire to consume you, for my cells to know you, for my body to be your body?

anvil headphones hairbrush construction cone cracked asphalt frayed shoelace athletic sunglasses glowing gate numbers at airports tall grass rusted nails cats sleeping in the sun dirt under my nails vents that blow hot air teeth left in a clean, white jaw in the woods tiny eyeball-shaped lights the plastic handle of my toothbrush cardboard boxes stacked behind grocery stores baseball caps soccer soccer moms minivans and rocks, even the ones that are almost heart-shaped that some asshole will pick up and call a heart when really it’s just a fucking rock that barely even looks like Ohio.

Even that wouldn’t remind me of you (until it did).

In an interview Claudia Rankine said, “We’re invested in [things], despite the fact that they are not good for us and place us in a non-sovereign relationship to our own lives.”

I kept quoting this line while everyone on the Internet rallied against the ugliness of the world.

I slotted concerns about police brutality and racism and rape and the lineage of injustice between thoughts of you.

I kept quoting this line when I rolled over in the dark cloak of my own tendency toward self-destruction.

Were you the rocks I elected to break myself against?

Are we all as helpless as we feel—when we watch the news?

You visited me at my grandfather’s house on the other side of your town. That I used to think of your town as my own was the excuse I had for always coming back. We learned romance like it was new under the watchful eyes of my childhood while Fox serenaded us through the floorboards.

I hate to think the shrine of my devotion was just borrowed from the forgotten names that came before yours, but you were different.

I couldn’t have possibly felt this way before.

I grew restless with my inability to replace you with Math or the study of foreign languages. I pretended to know the difference between anxiety and a lack of impulse-control. Facebook suggested we become friends because I kept composing messages made of all the gym equipment I wanted to have sex with you on:

Did you have fantasies? I did.

I’d ask you to marry me and you’d say no and we would never talk again and just feel a little unhappy for the rest of our lives but would never be able to know how that feeling differed from the alternatives.

When I said forever, did you think “Together” or “Not together”?

As I undressed for bed in my cold apartment your smell came out of my clothes and what struck me was not that you could linger for months on my skin but that the smell was at once unfamiliar and unmistakable. Your body or detergent or maybe the smell of the room you were born in. But as soon I tried to grasp it it slipped away, as if it had never been there at all.

The toes of my shoes nudge the doorframe and my breath condenses on thick white paint. I lick the ridges in the wood, masked by a layer of white for each tenant that’s lived here before me. If I’m careful, I’ll see archaic opulence through the window of my closed eyes. The view from your sheets was pink with daylight and the domed roofs of banks and I memorized dust motes piercing the sun before it could hit us.

The breath that gathers between my face and the wall could be yours if I don’t shake the snow globe of my memory and erase you riding elevators to views of the Great Lakes we’ve each lived on and off, where we could still meet and shiver at the top of a mound of government paperwork.

You didn’t ask me to stay, but maybe it’s not too late for that.

The flight from my city to yours took exactly 1/8 th the time required to drive the same distance.

I considered the magic of being catapulted through space as I was violently shaken to sleep. When the window became impossibly dark, I placed four peanuts at a time on my tongue and sucked away the salt;

I repeated Flesh of my flesh.

Tatiana Ryckman was born in Cleveland, Ohio. She is the author of the novella I Don’t Think of You (Until I Do), out from Future Tense Books, and two chapbooks of short prose, Twenty-Something and VHS and Why It’s Hard to Live. Her work has appeared or is forthcoming on Literary Hub, Hobart, Barrelhouse, and Flavorwire, among other publications. Tatiana has been an artist in residence at Yaddo, and is the Editor of Awst Press. More info at tatianaryckman.com.

Excerpted from I Don’t Think of You (until I do) by Tatiana Ryckman. Published by Future Tense Books.

Daughters of the Air