We tend to imagine works awarded the Nobel Prize for Literature achieving a sort of immortality: the books are read (or professed to be read) by intellectuals and the au courant worldwide, and their authors enshrined in an elite canon. Yet it could be that few in the Western world have heard of Danish-born novelist and playwright Karl Adolph Gjellerup, much less his “legendary romance” Der Pilger Kamanita (“The Pilgrim Kamanita”), for which he co-won the prize in 1917. But come to Thailand, where the novel was translated in 1930, and you might think it were the product of native genius: the text is excerpted for high school curricula and listed on the Ministry of Education’s top 100 books all Thais should read in full. Flipping through a collection of watercolors based off of classical Thai literature and painted by artists under royal patronage, I see Vasitthi, Kamanita’s lover, seated on a white lotus blossom amid more standard scenes from Thai epics and dramas. Kamanita was the first novel I completed cover to cover in Thai, and until I discovered the excellent, if dated, English translation by John E. Logie (better than the Thai and available for free online), I knew it solely within a Thai context, as a Thai artifact, with scant background on its author or what it might have signified in its own place and time. But how did a book written by a little-known European author near the turn of the last century become so deeply embedded in the psyche of a Southeast Asian kingdom? 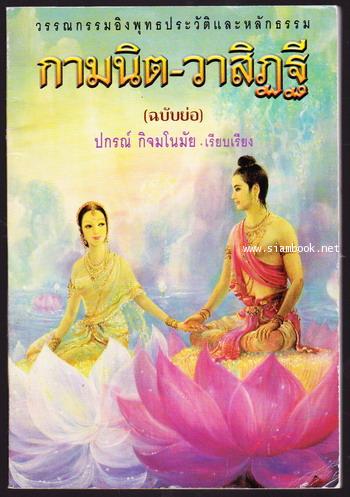 Like Hess’s more famous Siddhartha, Kamanita sets an original story against the backdrop of the Buddha’s latter years. Its landscapes, both mundane and extramundane, are populated with personages already familiar to readers reared on tales of the Buddha’s lifetime. On earth, where the first half of the novel takes place, the towns and villages of northeastern India are abuzz with talk of the radical new Teacher, who leads his followers among such historical cities as Rajagriha and Kosampi. The rural trade routes and jungles beyond are terrorized by the infamous bandit Angulimala, who wears a garland, or mala, of his victims’ shriveled thumbs around his muscular neck. In the book’s second half, pure souls are reborn encased in lotus blossoms in Sukhavati, the “abode of bliss,” where apsara strum musical instruments and the ever-blooming Parijat tree grants memories of past lives. The world of Gjellerup’s novel thus presents no challenge to readers from Thailand, a predominately Buddhist nation. Scan one of the sprawling murals depicting the Buddha’s cosmos in a Thai monastery, and in the small corners reserved for scenes of everyday life I almost expect to glimpse Kamanita and Vasitthi beneath the shade of an ashok tree, declaring their love as only late nineteenth-century lovers can.

Kamanita’s name suggests “one led by desire,” and it is the evolution of this desire that drives the story. First, it is romantic desire for Vasitthi, the daughter of a wealthy household who pledges a mutual oath to meet him beside “the heavenly Ganges,” the Milky Way, should they ever be separated. But after Kamanita is captured by bandits from Angulimala’s band and Vasitthi married to a rival, his desire transforms into an obsession for accumulating material wealth. Finally, terrified of, and yet half-wishing for, Angulimala’s robbing him out of house and home, and fired up by rumors of the Buddha’s solution to the question of human suffering, he abandons his domestic life and becomes a pilgrim. He is determined to meet the Buddha and accept his teachings, and thereby gain rebirth along the heavenly Ganges, there to reunite with Vasitthi in never-ending bliss.

It’s here that Gjellerup’s work not only weaves Buddhist material into compelling fiction, but reaches points of Buddhist philosophy largely ignored or even out of the ken of most Thai Buddhists. In his desire to be reborn in heaven, where he can continue partaking in sensual pleasures, Kamanita’s ultimate goal is that of the average layperson, whose focus on Buddhist ritual is more often than not for the betterment of his or her material circumstances in the hereafter.

Growing up, whenever I went with my relatives to give alms at monasteries, or donated to the construction of this or that new pagoda or the casting of another golden Buddha image, the rhetoric surrounding such rites was always: make punya, spiritual merit, and earn a more comfortable existence, one accompanied by wealth, prestige, power, and other worldly trappings. Earn enough merit and you can attain the most comfortable rebirths in the heavenly realms of Buddhist cosmology. “Yak keun sawan—I want to go to heaven,” says the worshipper dropping coins at the feet of the Buddha image corresponding to his day of birth, a ubiquitous site in any temple corridor, as if purchasing tickets to the realm of bliss. Become a monk, Thai tradition tells me, even for a short time, and your parents will also go to heaven. And what of Nirvana? That is a point of doctrine referenced little, if at all, something only for monks and nuns to discuss and aspire to.

Idealistically speaking, the goal of a comfortable afterlife is beside the point of, and perhaps even a distraction to, Buddhist practice. Kamanita is instructed as much by an older pilgrim, an ancient man with whom he passes the night while en route to intercept the Buddha:

By attachment to existence, O pilgrim, thou comest into existence; lacking such attachment thou dost not come into existence,” the man says, and here Gjellerup paraphrases Buddhist doctrine in virtual translation: “And in the monk, who is nowhere held fast by his affections, there grows amid the unclouded cheerfulness of inward peace this perception—”that now is his salvation sure, that this is the last birth of all, that there will be no new existence beyond” [emphasis mine].

The Buddha’s ultimate goal for himself and his followers, Nirvana, in as much as it can be defined, is a liberation from the cycle of birth, death, and rebirth to which all conditioned physical states, even heavenly ones, are otherwise subject. Seen this way, heaven is an impermanent solution to the problem of suffering, merely a fancy rest-stop from which the migratory soul must travel again (though, don’t get me wrong, I would get my parents and myself there if I could—and you too, dear reader). Nirvana takes you off the road entirely. For one who attains it, “no life can ever germinate again,” the old man says—life, with its proclivity to pain, sickness, and age, but also its wealth of sensory pleasures. It is a point of doctrine that disturbs Kamanita, passion’s pilgrim, and that the average practitioner tends to ignore.

“Thou hast told me much of how the monk should in his lifetime make an end of suffering…But of an eternal life of supreme happiness and heavenly bliss—of that I have heard nothing. Has the Master revealed nothing concerning it?” Kamanita asks the anchorite—who, unbeknownst to him, is the very Master he seeks. Kamanita will not learn the truth of this particular teaching until his spirit is reunited with Vasitthi near a tributary of the Milky Way and, after what seems an eternity, that celestial realm too begins to disintegrate. 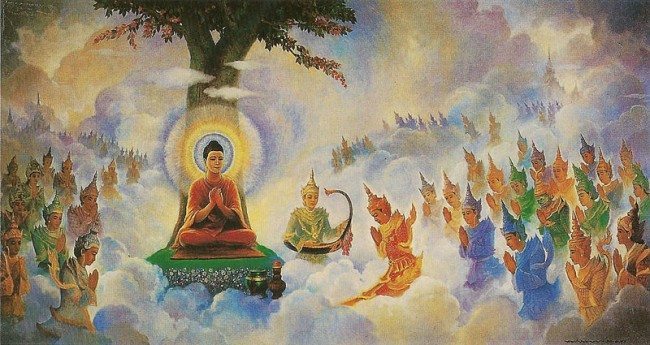 I don’t know when Gjellerup first encountered Buddhist philosophy, what his sources could have been, and to what extent he believed in the Buddhist worldview that frames his novel. I can’t discern whether or not he wanted his readers to do so either, though Gjellerup is neither ironic nor critical in his presentation of Buddhist doctrine. From what I can tell, and as much as Gjellerup’s Wikipedia page can teach me, the author was an atheist whose interest in Eastern philosophy was piqued later in life. He was also a figure in the Modernist Breakthrough—whatever that means. Do we need such context in order to authentically appreciate a text? We certainly don’t need it to enjoy Gjellerup’s story: equal parts romance and adventure provide the entertainment factor and, especially in the second half, the characters’ lives interconnect in complex and unexpected ways. (You’ll likely need at least a cursory interest in Buddhism to make it through the novel, though, especially when the old man starts laying it hard on Kamanita. Interest is, of course, not the same as belief.)

But for believers in both Thailand, where it has taken a life and cultural context of its own, and beyond, approaching their shrines and wishing for wealth, beauty, and power, The Pilgrim Kamanita might be a dharma-dhan, a gift of dharma—whether or not Gjellerup meant for it to be.

Noh Anothai was a researcher with the Thailand-United States Education Foundation (Fulbright Thailand) between 2011-12. Noh’s translation of Sunthorn Phu, Thailand’s national poet, and his Poems from the Buddha’s Footprint, is forthcoming from Singing Bone Press. Noh is currently back in Thailand chasing his latest hair-brained scheme: a travel memoir retracing Phu’s footsteps across the country. Pressure him into completing his project and get updates on the book at www.sunthornphu.wordpress.com.