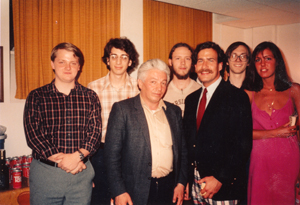 This is the second installment of Marcia DeSanctis’s series on three of Russia’s most influental 20th-century writers- Joseph Brodsky, Vladimir Voinovich, and Yuz Aleshkovsky. You can read her first disptach here.

Vladimir Voinovich — Silenced in 1974 in the USSR and forced to emigrate in 1980.

I met Voinovich when he visited the Department of Slavic Languages and Literature at Princeton, where I was studying as an undergraduate. It was also there I had first read The Life and Extraordinary Adventures of Private Ivan Chonkin, considered a classic in its genre: anti-Soviet literary satire. The author spoke to me on the phone from his home in Hamburg, Germany in July, 1987.

Here is the transcript of that conversation. 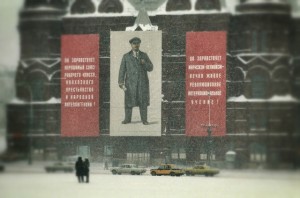 Marcia DeSanctis: Your new novel Moscow 2042 is quite prescient. Do you think, with perestroika, we are seeing the beginning of the end of the Soviet Union?

Vladimir Voinovich: In order for perestroika to be effective and irreversible it has to happen by degrees. If the Soviet government wants perestroika to be complete it has to be gradual and in the right direction. Freedom and openness means democratization – and for a people not used to democracy this can lead to chaos—demonstrations, for example, and too much unrest. Two steps forward, one and a half steps backward—in the right direction—could cause permanent and far reaching changes in the Soviet system.

The changes so far are not deep enough. I’m skeptical about the release of political prisoners. When they go home, they are given no work, no voice. Their energies are wasted and if authority doesn’t give them a legal way to live in public life they will search for illegal ways. Release them to a normal position in society. This goes for publishing. Let them express opinions! This can be very useful. If not, they’ll try to fight against glasnost, but if they’re allowed as writers to be published, the problem is over. If not, the magazine becomes illegal. The authorities have a dilemma. If the writer is arrested, perestroika is finished.

MD: What progress has been made so far and do you think that an end to all literary censure is possible?

VV: The only significant thing that has happened is the rehabilitation of dead writers. Enormous amounts of literature remain strictly suppressed. I hope they understand that it is impossible to have real perestroika without the rehabilitation of all writers. If there are forbidden names, there is no glasnost at all. The writers union is against perestroika and it has its share of corruption. Literature in Russia doesn’t have real value because writers, like other Soviet workers are in the favor business—if you fix my car, I’ll publish your book, that kind of thing.  Maybe they are instructed not to publish too many émigrés or young writers. Maybe they’re afraid. The writing bureaucracy is still dominated by men over 40. Maybe if there is too much glasnost there will be too much competition, where the readers opinion is what actually sells the book. If they publish too many banned writers many Soviet writers will be unemployed. Who will want to read them then? Real competition depends on the reader’s opinion and the market.

MD: How do you suppose it is different for you as an émigré living in Germany than if you were still in the Soviet Union? 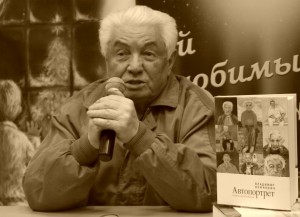 VV: For me as a writer, I think it is not so dramatic a problem, even for us (émigrés). The last 12 years I lived in Russia I was disconnected with the readers. So in effect I lived in immigration in Russia. Now I am a real immigrant. When I’m writing, any experience is experience. You can use any one of them. The émigré experience is just another thing to be used. A writers’ issues don’t change – it’s always a problem to write new books, there is always the fear that, maybe I’m through this time. If a Russian writer emigrates , everyone thinks he’s finished. The problem happens everywhere. The writer’s life is always the same. Material is life and life is material—it’s the fate (судьба)—of the writer. I didn’t become an émigré writer deliberately. But here (in Germany), I could write Moscow 2042. I will continue, of course, to write about the Soviet Union. And also about the West. In the third volume of Chonkin, he will be in immigration. By the way, the exiled Russian writer is another kind of literary tradition. Gogol, Turgenev, Dostoevsky, Bunin, Tsvetaeva, Bely, Alexei Tolstoi—they all wrote at some point from abroad.

MD: How is freedom or the lack of it important to a writer and tell me about your circumstances in the USSR.

VV: My roots are very different. My grandparents are from Yugoslavia. My grandfather was brought to Russia when he was 4. I was born in Duchambe (Tadjikistan). My father liked to travel. He married my mother and moved to Duchambe. So I was prepared for emigration. I always believed that freedom was very important. I am very confident in this belief. I don’t feel that my background in the Soviet Union had any influence on my attitude towards freedom.

In Russia I had “internal freedom”—the freedom to think—but external freedom is also very important. The last year there I always feared the KGB. I was in danger. They could come any time and confiscate me or my papers. I got used to it—I was in this situation for 7-8 years. I was worried they’d come and do something bad to my family, my children. I was very nervous and it was difficult to write. It wasn’t real fear. You have to be vigilant. Of course I couldn’t write what I wanted to write. But the harder it became, the stronger was the writing. That’s just how life is. Now in Germany the situation is obviously much better. In order to write prose, you need to be quiet. Still it’s very complicated to say life overall is better here.

Back in Russia we had only the choice of two bad possibilities as our fate. Write openly (and compromise your creative self) or write secretly (and remain invisible or inaccessible). I would prefer to live in Russia if it were democratized. I left my 2 children there, from my first marriage. I’m not entirely happy here in Germany. I would like eventually to have the possibility to go home. It shouldn’t be a hard decision. It’s important only to feel that you are a member of your own society.

As for my writing, when I wrote Moscow 2042 I believed it was not my best book, nor my worst. When I’m writing, I think whatever I’m writing is the greatest thing ever. Once it’s out there, I cool down.

MD: How does a life in exile affect your writing?

VV: I feel more alienated in Germany than in the USA. Germans in general treat aliens as aliens. I feel better in the USA. When I knew a couple of words in English, people would compliment me. In Germany you have to really deserve the compliment, because normally they will just correct you.  But to feel like an alien is also useful for a writer.

In Russia it’s important to have read Tolstoi and Pushkin. You can’t be a member of society without it. Except in Russia, literature is absolutely unimportant. People care about literature in Russia because it tried to solve some important problems. In Russia, literature was always the teacher. Here (in the west) problems are solved or at least explored in other ways—by TV and movies and the daily newspaper. In the USA, literature never had as much widespread meaning even though much American literature is truly great.

MD: Describe the Russian writer’s role in history and how is it different now than, say, 150 years ago?

VV: For literature it’s important for a society to have the same problems for many years. Writers should feel under pressure because they’re much more important than public figures. Because when the government doesn’t want to solve problems, only the writer has the solution. But ironically only if you have a normal government can you actually write a novel about it. You think, this is a problem and I am going to creatively solve it.

Vasily Grossman’s Life and Fate—in 1960—was a very big novel and it was confiscated. (**note: Voinovich was in part responsible for the book’s being published, by smuggling it to Germany on microfilm.) It is a big and explosive novel, but he wrote about problems which didn’t officially exist in the eyes of the State.

I am interested in both an artistically good book and ones that take on social issues of the time. I created the character of Chonkin because it’s how I criticized Stalin and everyone associated with that time. It’s a good book if the reader can say, I believe it happened, because it happened with me. I try to write about very human problems. Then I create characters. But I do it in order to put important social questions out there, and answer them if possible. Still, my first impulse is from the imagination.

MD: What are you reading now, of your contemporaries?

VV: Yes, I read modern literature but mostly, I read the classics now. I feel I need it more than before. I read them in childhood and now when I read them I feel at home. Now, I’m reading the new novel of Anatoly Pristavkin,  A Golden Cloud There Rested, and it’s wonderful. Mostly, I read Gogol and Chekhov. Chekhov is my favorite writer by a long shot. When I want Chekhov, I go right to the stories. I didn’t like (the play) Three Sisters.

Marcia DeSanctis is a journalist and writer whose work has appeared in Vogue, Town & Country, O the Oprah Magazine, The New York Times, The New York Times Magazine, Travel & Leisure, Best Women’s Travel Writing 2011 & 2012, and Best Travel Writing 2011 and 2012. Her Lost & Found on Graham Greene’s The Comedians was in Tin House Issue #54. In 2012, she was the recipient of 3 Lowell Thomas Awards for Excellence in Travel Journalism, including the SIlver award for Travel Writer of the Year. Previously, she was a producer for ABC, NBC, and CBS News.

Tune in tomorrow for the correspondence with Yuz Aleshkovsky.

This City Could Be Your Poet: Seattle