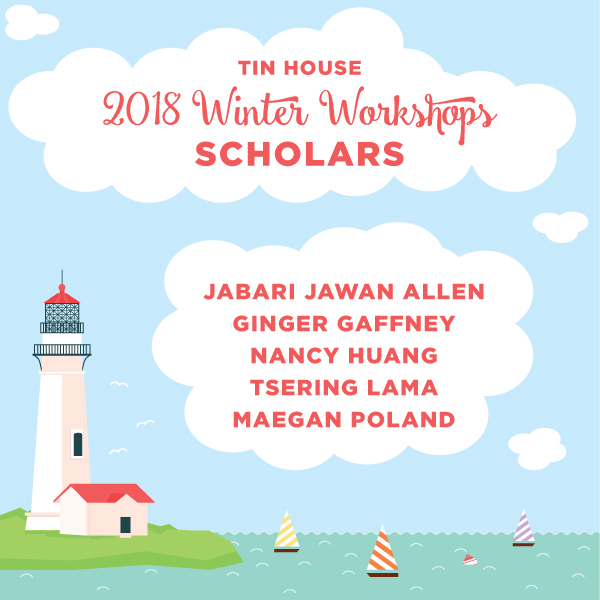 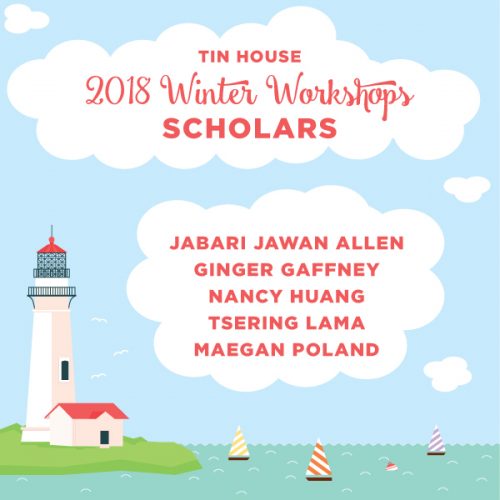 We recently concluded our fifth year of hosting winter workshops out on the Oregon Coast and fitting for an anniversary associated with wood our 2018 Winter Scholars are building towards an impressive collection of stories, novels, memoirs, and poems. As such, it was an honor for us to be the scaffolding as these five writers spent their time in Newport working towards what is sure to be vital and well-regarded work in the years to come (if not already).

We cannot wait to see where their words take them (and us).

Jabari Jawan Allen is a poet from the South Side of Chicago, IL. A Tin House Scholar, Jabari has received fellowships, grants and support from the Voices of Our Nations Arts Foundation (VONA), Poets House and The Home School. Jabari’s poems either appear or are forthcoming in Four Chambers, The Shade Journal, Vinyl Poetry & Prose, among others. Jabari currently lives in Phoenix, AZ where he is working on his first full-length manuscript of poetry tentatively titled Bridegroom.

Ginger Gaffney received her MFA in Creative Writing from the Institute of American Indian Arts in Santa Fe, New Mexico earning top honor in Creative Non-fiction. Five chapters of her new book; Half-Broke have been published in Tin House, The Utner Reader, Witness Magazine, Quarterly West, and Animal Literary Magazine. She has received writing fellowships from Tin House, Writers at Work, and Corporeal Writing, as well as a writer’s residency from Writing X Writers. Poetry, the landscape of New Mexico, and her relationships with people and animals have the most influence over Ginger’s writing. She has lived and worked as a horse trainer in northern New Mexico for over twenty years. She is currently working on a collection of short stories based on her work as farm manager at a recovery center.

Nancy Huang grew up in America and China. She is a winner of the 2016 Write Bloody Poetry contest, an Andrew Julius Gutow Academy of American Poets Prize, a James F. Parker Award in Poetry, a 2015 YoungArts Award, and more. Her writing has appeared or is forthcoming in Vinyl, Bodega Magazine, TRACK//FOUR, Winter Tangerine Review, The Shade Journal, and others. She is an alum of Voices/VONA and the Iowa Writer’s Workshop summer graduate session. Her debut poetry collection, Favorite Daughter, is out by Write Bloody Publishing. You can find her here.

Tsering Lama is a New York-based Tibetan writer who was born in Nepal and grew up in Canada. Her fiction, plays, and poetry have been published in journals and magazines such as The Malahat Review, Grain, Vela, LaLit, Dolma and Himal SouthAsian, as well as the anthologies Old Demons, New Deities: Twenty-Two Short Stories from Tibet, House of Snow, and Brave New Play Rites. She is a 2018 Hedgebrook Resident, and in the past has been supported by grants from the Canada Council for the Arts and the Barbara Deming Memorial Fund, as well as residencies at the Lillian E. Smith Center, Omi Writers International, Catwalk Institute, WildAcres, and Playa Summerlake. Tsering earned an MFA in writing from Columbia University as a TOMS Fellow, a Writing Fellow, and a University Writing Teaching Fellow. She works as a Storytelling Advisor for Greenpeace International.

Maegan Poland is a Black Mountain Institute Ph.D. Fellow at the University of Nevada, Las Vegas, and she holds an MFA in fiction from the University of Mississippi. Her writing has been published or is forthcoming in Pleiades, Juked, Notre Dame Review, Day One, and LitHub. One of her stories was awarded a Pushcart Prize Special Mention. She has served as Fiction Editor for Witness magazine, and as a Managing Editor for Yalobusha Review.

The Art of the Sentence: Shunryu Suzuki