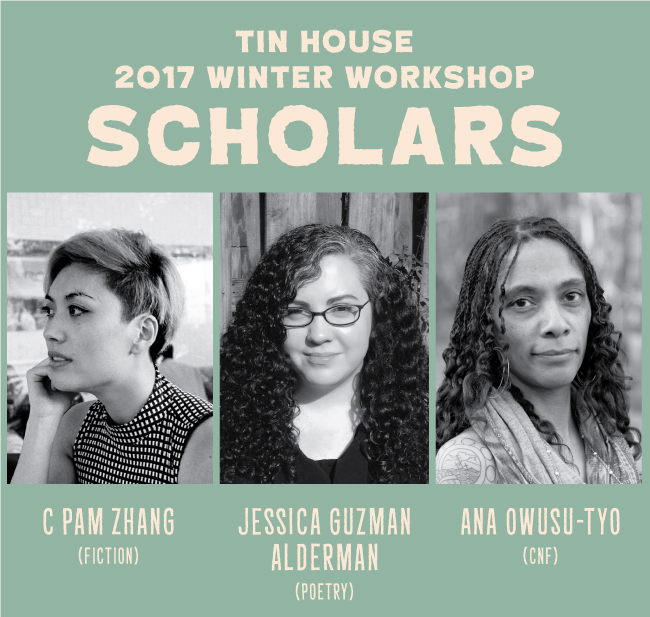 It is both and honor and thrill to introduce you to our inaugural class of winter workshop scholars. All three of these remarkable writers inspired us, both on and off the page, and we could not be more excited to follow their voices in the years to come.

C Pam Zhang’s fiction is in or coming to Black Warrior Review, Gulf Coast, The Missouri Review, The Offing, Tin House Open Bar, and elsewhere. An Aspen Words Emerging Writer Fellow and a Hambidge Center Distinguished Fellow, she was recently a runner up in The Missouri Review Editors’ Prize and an honorable mention in the Zoetrope Short Fiction Contest. She’s not quite sure where home is, but lives online @cpamzhang.

Jessica Guzman Alderman is a Cuban-American writer from southwest Florida. Her work appears or is forthcoming in Copper Nickel, Sycamore Review, The Normal School, BOAAT, and elsewhere. She received her MFA from West Virginia University and currently studies as a doctoral student at the University of Southern Mississippi’s Center for Writers. She reads for Memorious.

Ana Owusu-Tyo has a master’s degree in eighteenth-century literature from Indiana University. She is Spanish and Ghanaian and currently lives far away from her native Brooklyn on ten acres in rural North Carolina where she raises her three children and chickens.  She is finishing a memoir about losing a daughter and beginning a novel inspired by the spirits on the former plantation she lives on. An excerpt of her memoir, Footnotes, has recently appeared in the anthology Stories that Need to be Told. She is also semi insta-famous for her crochet and recently learned to do a headstand in the middle of the room.