Now that the dust (and karaoke) has settled, one last dispatch from our summer writing camp….

We are thrilled to announce the recipients of our 2017 Summer Workshop Scholarships. It was an honor to host them at Reed College and get to know their work through the application process and workshop.  These sixteen Tin House Scholars not only represent our best and brightest, but carry the torch of being good literary citizens as well.

It is a true privilege to have them be a part of the Tin House family. As such, we hope they write home now and again. 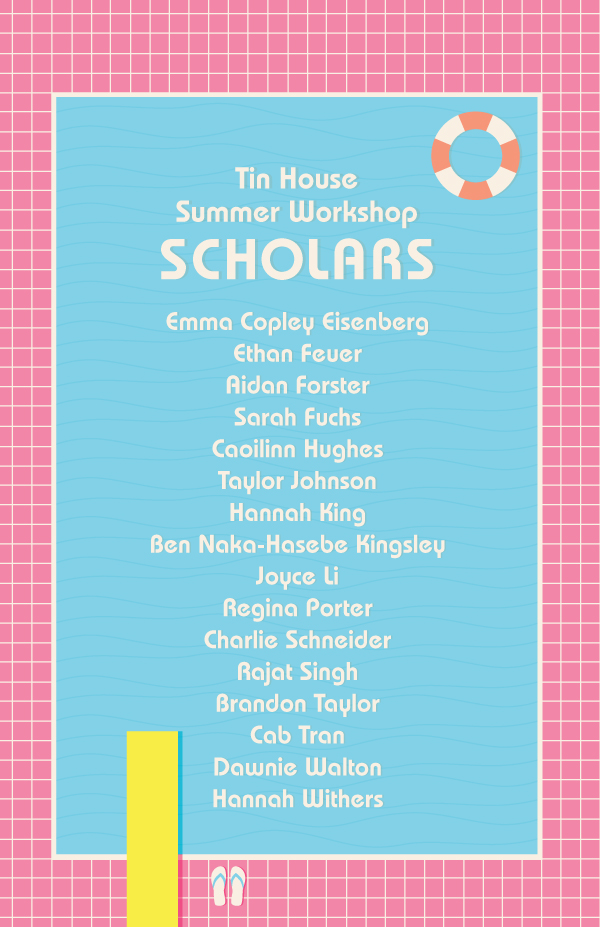 Emma Copley Eisenberg is a writer of fiction and nonfiction. She writes about queerness, Appalachia, ambivalence, having a body, and being alive. Her essays, and reportage have appeared/will appear shortly in VICE, Catapult, Splinter (Fusion), The New Republic, Salon, Slate, The Marshall Project, Hyperallergic, The Rumpus, 100 Days in Appalachia, The Daily Yonder, Autostraddle, The Philadelphia Inquirer and others; her fiction in Granta, American Short Fiction, the Los Angeles Review of Books, and Gulf Coast. She lives in West Philadelphia.

Ethan Feuer is a writer and designer living in Virginia. His fiction has appeared or is forthcoming in the Indiana Review, Electric Literature, Tin House Open Bar, DIAGRAM, Smokelong Quarterly, and elsewhere. He received his MFA from the University of Virginia, where he was runner-up for the 2017 Henfield Prize. Design work (at Architecture Research Office) includes project for Brookly Bridge Park, Tulane University, and Brooklyn Botanic Garden. He is at work on a novel about plague and acculturation in a fictional city.

Aidan Forster studies creative writing at the South Carolina Governor’s School for the Arts and Humanities in Greenville, South Carolina. He reads poetry for The Adroit Journal and The Blueshift Journal. His work appears in BOAAT, Indiana Review, Pleiades, Sixth Finch, Thrush Poetry Journal, and Verse, among others. He was a finalist for the 2017 Vinyl 45s Chapbook Contest, and his debut chapbook, Exit Pastoral, is forthcoming from YesYes Books in 2018.

Sarah Fuchs taught high school and middle school for nineteen years in Lomé, Accra, Kampala, Dar es Salaam and Oakland, CA, where she co-founded the School for Social Justice and Community Development. A graduate of the NYU Writers Workshop in Paris, she is the 2016-17 Carl Djerassi Fiction Fellow at UW Madison, and has received fellowships from the MacDowell Colony, Tin House, Aspen Summer Words and Writing by Writers Tamales Bay. She is working on her first novel.

Caoilinn Hughes’ debut novel, Orchid & the Wasp, will be published in 2018 by Hogarth (U.S.), Oneworld (U.K.) and Les Éditions Bourgois (France). Her poetry collection, Gathering Evidence (Carcanet 2014), won the Irish Times Shine/Strong Award, the Patrick Kavanagh Award and was a finalist for four other prizes. She has received fellowships from the James Merrill Foundation, the Bogliasco Foundation, the Centre Culturel Irlandais, and scholarships from the Tin House Summer Workshop 2017 and the Arts Council of Ireland. Her work has appeared in POETRY, Tin House, Best British Poetry, Best NZ Poems, Poetry Ireland, BBC Radio 3 and elsewhere. She is represented by Bill Clegg.

Hannah Perrin King grew up on a dirt road in rural California and now lives in Brooklyn, NY. When people ask her, “What do you write about?” she cringes and mumbles something about god and horses. As a one-time pre-med escapee, King is primarily interested in blending genres and disciplines in a way that speaks to the human condition but still helps poetry’s bad rep. She is currently a MFA candidate in Poetry at The New School, and recently received honorable mention in The Cincinnati Review‘s Robert and Adele Schiff Awards in Poetry and Prose.

While Ben Kingsley is best known for his Academy Award winning role as Mahatma Gandhi, this Ben is a touch less famous (having not acted since a third-grade debut as the undertaker in Music Man). He is the 22nd Tickner Writing Fellow, recipient of a Provincetown Fine Arts Work Center fellowship, scholarships from Kundiman, Sewanee, VONA, & belongs to the Onondaga Nation of Indigenous Americans in New York. In 2017 his work will be featured in Apex, the Iowa Review, Narrative, Ninth Letter, PANK, PEN America, the Poetry Review, Prairie Schooner, Sugar House, & Water-Stone Review, among others.

Joyce Li is an MFA candidate in fiction at Brooklyn College. In addition to Tin House, she has received fellowships and awards from the Norton Island Residency Program and the New York State Writers Institute. A Jersey girl at heart, she now lives in New York, where she works at a non-profit organization for immigrants in the arts and sciences and enjoys copious amounts of dim sum. She is working on her first novel, set in the Kowloon Walled City.

Regina Porter is a graduate of the MFA fiction program at the Iowa Writers’ Workshop, where she was an Iowa Arts Fellow. She is the recipient of a 2017-2018 Rae Armour West Postgraduate Scholarship. Her fiction has been published in the Harvard Review. An award-winning writer with a background in playwriting, Regina has worked with Playwrights Horizons, The Joseph Papp Theater, New York Stage & Film, The Women’s Project, Woolly Mammoth Theater, and Horizons Theater Company. She has been anthologized in Plays from Woolly Mammoth by Broadway Play Services, and Heinemann’s Scenes For Women by Women. Regina lives in Brooklyn.

Charlie Schneider completed an MFA in fiction at the University of Oregon. His work explores the ways people construct clever edifices of denial in order to rationalize their own wrongdoing. Of late, this has taken the form of stories about the perpetrators of lynchings. He has received a fellowship from the Tin House Summer Workshop and a Work-Study Scholarship from the Bread Loaf Writers’ Conference. This fall, he will spend a month at the Hawthornden Castle International Retreat for Writers, where he will hunt ghosts.

Rajat Singh is an essayist living in New York. His work appears in The Gay & Lesbian Review, in two anthologies, Moving Truth(s) and Kajal, and on Catapult, LitHub, and Papercuts, among others. This summer, in addition to Tin House, he is attending the Lambda Literary Writers Retreat. He is working on a collection of essays on queer melancholy.

Brandon Taylor is the assistant editor of Electric Literature’s Recommended Reading and a staff writer at Lit Hub. This fall he will begin an MFA in fiction at the Iowa Writers’ Workshop. He currently lives in Madison, WI where he is a PhD candidate in biochemistry at the University of Wisconsin-Madison.

Cab Tran was born in Vietnam and raised in rural Oregon.  He received his BA from the University of Montana and his MFA from the Helen Zell Writers’ Program at the University of Michigan. A former David T. K. Wong Fellow, he has also been awarded fellowships and residencies from the Elizabeth Kostova Foundation and the Writers’ and Translators’ Center of Rhodes in Rhodes, Greece.  His work has appeared in Black Warrior Review, Vagabond: Bulgaria’s English Monthly, and elsewhere. In 2011 he was longlisted for the inaugural Paris Literary Prize. He lives in Missoula, Montana.

Dawnie Walton is a fiction writer and journalist whose work explores identity, place, and the influence of pop culture. She has received fellowships from the MacDowell Colony (2015) and the Iowa Writers’ Workshop, where she is currently working on her first novel. Her fiction was most recently featured in audio form as part of Let’s Play, a gallery exhibition of AfroSurreal artists in Oakland, California. Before following literary muses, she was an editor for Time Inc. titles including Essence, Entertainment Weekly, and LIFE.

Hannah Withers is a writer and joke-teller living in Portland, OR. She received her MFA from the University of Montana, was a 2016 Fiction Fellow at the Idyllwild Arts Writers Week, has had work published with The Kenyon Review, McSweeney’s Internet Tendency, The Believer Logger, The Santa Clara Review, and elsewhere, and was a finalist for the 2016 Tobias Wolff Award for Fiction. She’s currently working on a novel that she’s calling a “western,” which is both accurate and misleading. She can be found online @hbwithers, and can be found in the world next to the chips and guac.