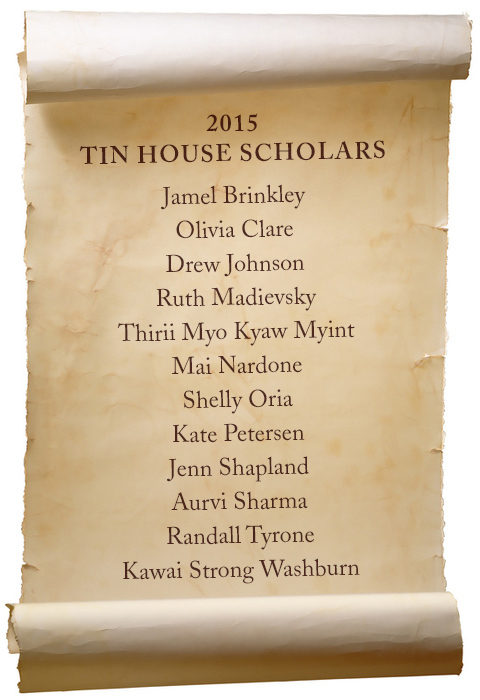 Jamel Brinkley is a Kimbilio Fellow, a recent graduate of the Iowa Writers’ Workshop, and the 2015-16 Provost’s Visiting Writer in Fiction at the University of Iowa. He has been awarded scholarships from the Bread Loaf Writers’ Conference, as well as the diFilipis-Rosselli scholarship from the Napa Valley Writers’ Conference. He is at work on a collection and a novel, and his short stories have appeared in A Public Space.

Olivia Clare is the author of a short story collection, Disasters in the First World, and a novel, both forthcoming from Grove Atlantic. She is also the author of a book of poems, The 26-Hour Day (New Issues, 2015). In fiction, she is a recipient of a 2014 Rona Jaffe Foundation Writer’s Award and a 2014 O. Henry Prize.

Drew Johnson was raised in Mississippi and lives in Massachusetts. His fiction has appeared in Harper’s, VQR, Cosmonauts Avenue, and as a single-issue chapbook from The Cupboard. His nonfiction has appeared at Literary Hub, The Los Angeles Review of Books, and The Paris Review Daily. These pieces and others may be found at walkswithmoose.com.

Ruth Madievsky is the author of a poetry collection, “Emergency Brake,” which was named Tavern Books’ 2015 Wrolstad Contemporary Poetry Series selection and was published in February 2016. Her work appears or is forthcoming in The Iowa Review, Gulf Coast, Prairie Schooner, Rattle, ZYZZYVA, and elsewhere. She is originally from Moldova and lives in Los Angeles, where she is a doctoral student at USC’s School of Pharmacy. You can find her at ruthmadievsky.com.

Thirii Myo Kyaw Myint graduated from Brown University in 2011 with a B.A. in Literary Arts and International Relations. Her short stories have appeared in Caketrain, The Kenyon Review Online, The Bicycle Review, Adj Noun Magazine, and various Brown-RISD literary journals. She spent April 2012 as an artist-in-residence at Hedgebook on Whidbey Island, Washington

Mai Nardone’s fiction has appeared or is forthcoming in American Short Fiction, Indiana Review, The Iowa Review, Kenyon Review Online, Slice, and the Tin House Open Bar. He has received also received a scholarship from the Bread Loaf Writers’ Conference, and a fellowship from the MacDowell Colony. He lives in Bangkok.

Shelly Oria’s fiction has appeared in McSweeney’s and The Paris Review among many other places, and has won a number of awards, including the Indiana Review Fiction Prize. Her short story collection, New York 1, Tel Aviv 0 (FSG & Random House Canada, 2014) earned nominations for a Lambda Literary Award, a Goldie Award, and the Edmund White Award for Debut Fiction. The book was recently translated into Hebrew and published in Israel by Keter Publishing. www.shellyoria.com

Kate Petersen is from Arizona. Her work has appeared in Kenyon Review, Zyzzyva, New England Review, Epoch, Paris Review Daily, The Collagist and elsewhere. She is the recipient of a Stegner Fellowship and a Pushcart Prize, and currently teaches at Stanford as a Jones lecturer.

Jenn Shapland is a nonfiction writer. Her essays appear in Tin House, The Lifted Brow, Electric Literature, and elsewhere. She’s currently writing a book of nonfiction called The Autobiography of Carson McCullers.

Randall Tyrone has an MFA in poetry from the University of Wyoming and is an Editor for Essay Press. He’s been published in Okey-Panky/Electric Literature & Oversound Poetry.

Kawai Strong Washburn was born and raised on the Big Island of Hawai’i. His fiction has appeared or is forthcoming in Best American Nonrequired Reading 2016, McSweeney’s, Electric Literature’s Recommended Reading, and Mid-American Review, among others. He also received a 2015 scholarship to the Bread Loaf writer’s conference. You can find out more about him at www.kawaistrongwashburn.com.